I'd be lying if I said I wasn't a little excited about the return of RuPaul's Drag Race (season 3) last night.
I have absolutely no interested in doing drag, but I do appreciate it for its humor, glamor, and general over-the-top point of view. Those queens who really work at it have elevated drag to an artform in my humble opinion. I think RuPaul is gorgeous, funny, and a very savvy businessperson.
So it was with some anticipation that I snuggled in at 9pm to watch the hour long casting episode. Dressed as a man, RuPaul introduced us to each of the 12 new contestants using video clips they submitted to the show as auditions. 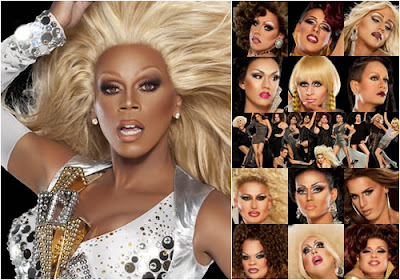 Mixed between these were some of the entrants that did not make it onto the show, but were noteworthy in some way. And for the 1st time this year, RuPaul held an in-person open casting which we were privy to see. Also included this season were the videos of the guys trying out for the 'Pit Crew' positions, and I was a little surprised that 1 of the guys selected for the position has chest hair!
After the casting episode came the 1st episode of the new season. It began like the previous 2 season openers with the cast members entering the work room 1 by 1 and getting to know each other. Once all 12 had arrived, Ru showed up and explained there was a surprise awaiting them. The Pit Crew guys wheeled out a large box and out popped Shangela, the 1st drag queen eliminated from season 2. She explains later in the episode that she auditioned again, just like all the others, and was happy to have a 2nd chance. Ru also explains that not only do they have a larger number of queens competing this year, but that the size of the cash prize for the winner is also larger this year: $75,000. Additionally, the episodes are 90-minutes long this season. 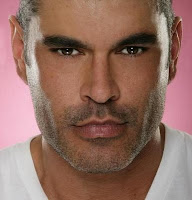 The girls have a Christmas-themed photoshoot with legendary photographer and uber-hottie Mike Ruiz (right), then Ru takes the queens to a thrift store and explains that they are to create a holiday outfit ("Christmas Couture") using clothing and items from the thrift store and Christmas decorations they'll find back in the work room.

On the 'main stage' RuPaul is joined by Mike, Santino, Michelle Visage (Ru's old friend from her late-90s talk show 'The RuPaul Show'), and Bruce Villanch who seemed to have no purpose in the episode other than to be dressed as Santa. Ru introduces this week's special guest judge Vanessa Williams, who looked a little washed out but still amazingly beautiful.
The Christmas Couture fashion show begins and we are treated to/tormented by a wide variety of outfits, from cute-n-clever to hot mess. The 11 queens who are safe are identified, and Ru tells the final 2 (Venus D'Lite and Shangela) that they'll have to lipsync for their lives. I felt kind of bad for Shangela because she was the 1st girl to be eliminated from season 2, she auditions and makes it into season 3, but is in the bottom 2 and up for elimination after the very 1st challenge.
Venus and Shangela begin dancing and lipsyncing to Vanessa William's "The Right Stuff" (I love that song!) and everything seems normal at 1st. Then about 1/2 way through we see Venus pushing and shoving Shangela. In 1 of those cut-away testimonials Mimi Imfurst explains that "Venus started getting rough and used Shangela's lamp shade skirt as a weapon", which made me laugh out loud! The next thing you know Venus pulls her wig off by its decorated ponytail and swings it in the air, letting it fly to the back of the stage where the safe girls are staring in disbelief. Next Shangela's wig comes off, as well as her shoes. Then we see Shangela's paper lamp shade skirt being placed around her neck by Venus, along with more pushing and shoving. I notice that Shangela is still lipsyncing as if her life literally depended on it, while Venus seems more intent on beating up Shangela than lipsyncing. There was a desperate quality to Venus' behavior that was both sad and entertaining at the same time. It was the hottest of messes!
At the end of the song/brawl RuPaul admits that what she's witnessed here has made her uncomfortable. She says she expects her girls to out-perform each other, not out-gun each other. Apparently due to her bad conduct Venus is told to "Sachet away" and Shangela is safe to compete again next week.

I noticed in this episode that RuPaul used a good bit more street slang which thrilled me to no end! I love it when she gets a little 'ghetto' and ends a sentence with "Oh-kuy?" (rhymes with oh-guy).
Immediately following episode 1 was the 'Untucked' show where we are treated to much of the 'behind-the-seams' drama and dishing that took place, especially in the interior illusions lounge.
All in all it was a fabulous 3-hour extravaganza full of glitz, glamor, and spirit gum!
Posted by Mark in DE at Tuesday, January 25, 2011

I'm a huge fan of the show, and Ru, and when i tell people about they instantly assume it's because I want to do it, or I've done.
I always tell them i have no desire to do drag--that would require shaving off mu goatee and I've had it so long that ain't happening.
And I have never done, except one Halloween in college where a friend and I went as a rather large Italian couple--me the wife, her the husband.
But I love the artistry and the talent to create those fabulous images.
It really is an art form.