Last night my friend Steven and I went to see Miss Coco Peru, live and in person!

First, I must say that I respect performers like Coco who are not so 'full of themselves' that they won't play small venues. I know Coco is used to larger venues like the Renberg Theatre and the Abbey in LA, but she also treats her loyal fans to top-rate hilarity at converted performance spaces in gay bars in small seaside resort towns, too. No, she's not 'above' that! She even included a few little jabs in her act about after 17 years of performing, look where she's gotten: a gay bar with a dressing room next to the mop sink. She's a class act! 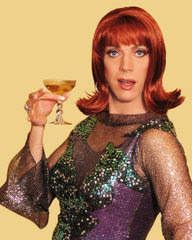 Since Steven's partner and Spouse are basically boring and would rather stay home watching TV, Steven and I went without them. We started our delightful evening with conversation over drinks and dinner. I've just recently gotten to know Steven so I had lots of investigative questions to help me get to know him better, and he was a good sport to indulge my CSI-like nosiness. I like him a lot.

After dinner we walked to the Blue Moon where Miss Coco Peru was to perform. Since its open seating, we arrived early enough to be the first in line at the door. Blue Moon employees would occasionally go in and out of the performance space, and when one of them left the door open, I saw Coco working with the manager to get the stage set-up right. I waved at her but didn't get a response right away, so I said to Steven "I don't think she sees me." However, she must have been reading my lips because she waved back and said "I see you."

I felt warm tingle go up my spine, just having been acknowledged by THE Miss Coco Peru! Yes, we're Facebook friends and have emailed back and forth before, and I wished her a happy birthday at her show last summer. But somehow, last night's acknowledgement was special. So I blew her kisses as the employee closed the door. 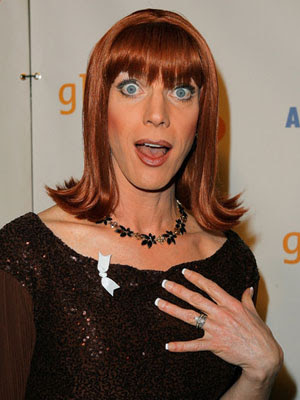 The crew finally opened the doors and Steven and I were the first two inside. I chose our seats: front row center. I wanted to be close enough to clearly see every single one of Coco's fabulous facial expressions. She's famous for them!

The show starts and Coco is her usual, hilarious self! I've seen her 1/2 hour Logo TV special and last night was my 3rd time seeing her live, and she always has all new material!!! (Take a lesson from that, Margaret Cho.)

We laughed so often and so hard that I thought I'd dislodged something internally at one point. But Coco's shows are not simply funny stories and songs; oh no, they also have messages. Personal acceptance. Respect. Moving beyond one's childhood pain. Revenge. Vigilantism. Yes, Coco had me choking with laughter over the idea of her touting a gun! 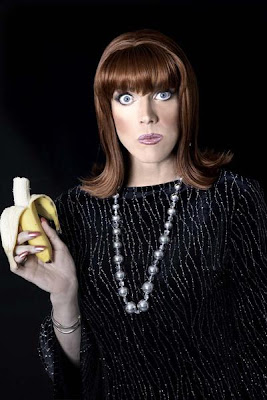 But as do all good things, her show came to an all-too-soon end. Walking back to my car I felt like it was Christmas and my birthday all rolled up into one night, spent with Steven and the truly fabulous Miss Coco Peru.

I can't recommend this too strongly: GO SEE HER SHOW!! Coco will be performing:

Check out her website for more dates and locations.

If you can't see her in person, by all means, watch her films, check out her YouTube clips, and join her Facebook fan page. Trust me, you'll be glad you did. 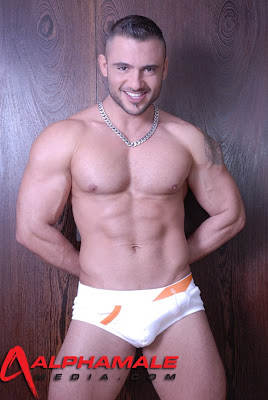 I would love to see her show! I hope she comes to Minneapolis.

Leave the boring ones behind -- Coco rules! How fun for you guys.

I love her.
i like a little topicality in my humor and she fits the bill.
Makes you laugh and makes you think.

You call your spouse boring? I love a good show. But I'm boring too.

That said, I wish she'd do Providence. We've got plenty of performance spaces here from AS220 up to PPAC, etc.

I love CoCo. Girls Will Be Girls is one of the funniest movies ever....

So Jealous. I love her too.

Was a great time ! Thanks for going with me.

I do like Coco. And I'm glad they featured her in the movie Trick. one of the best scenes!