Mon: The HVAC work was finally finished. The amount of HVAC work was minimal when compared to the plumbing and electrical, but the HVAC work took the longest due to an emergency in the HVAC contractor's family. He finally finished his work, just in time for me to request a couple of corrections. In the photo below you can see the first location of the vent on the right, and the new location of the vent on the left. 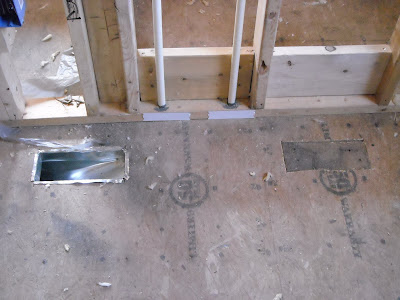 The first location was in the middle of a wall which would prevent any furniture from being placed there. So I had him move the vent to the right. In the photo below you can see 2 patches in the sub flooring inside the storage area. 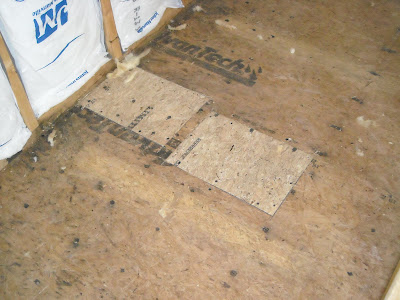 This is because Mike the builder was not happy with the location of another vent, so he had the HVAC guy move it. Honestly, I believe the HVAC guy is a good tradesman or Mike the builder wouldn't use him all the time. I'm sure he was just distracted by his family situation. Attic ventilation was also added, and some siding and trim touch-up painting was done.
Tues: The framing of the soffit for the new HVAC trunk line was completed. 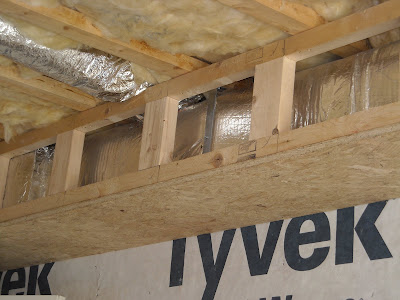 Insulation was put in the garage... 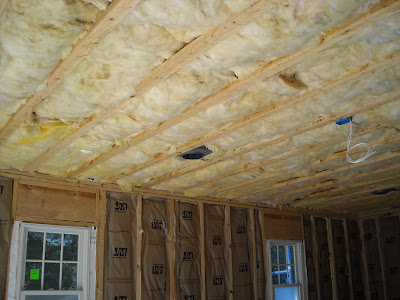 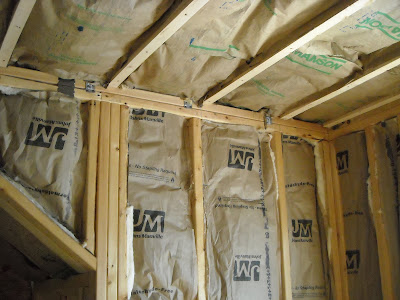 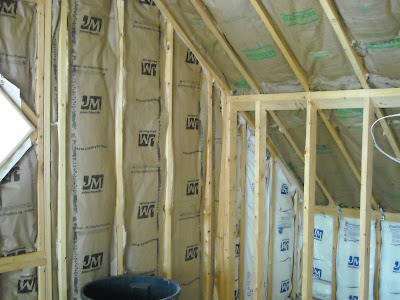 Wed: The drywall was delivered. I wish I could have taken some pictures of the cool crane they used to unload the heavy sheets of drywall off the truck and into the garage and house, but they arrived just as I was about to walk the dog, and they were finishing up 15 minutes later when we got back. The guy used a remote control device that looked like a Nintendo game console to operate the crane. They removed the upper and lower sashes from the upstairs window and slid the 4' x 8' sheets of drywall into the window opening with the remote controlled crane! I was amazed how little time it took them.
Just as the drywall delivery guys finished, the drywall hangers arrived, a day early. Ooops! A scheduling error meant they had to hang the drywall on Wed or else return next week. So Mike the builder, Jay, and Junior scrambled around for a few minutes to move their tools etc away from the garage walls so the drywall could go up. About an hour later, here's what the garage looked like: 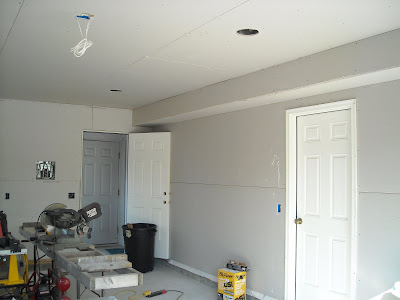 Here is the original bathroom with new drywall: 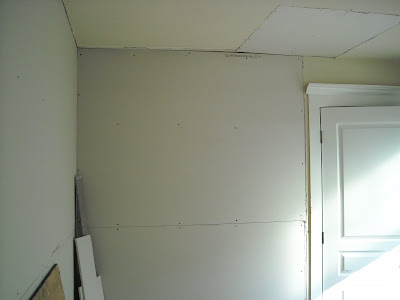 Standing in the original bathroom looking into the new space: 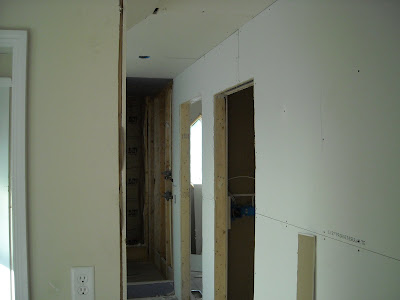 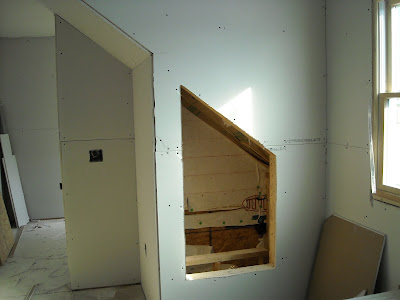 Standing in front of the shower and tub looking back toward the entry, the hole seen above is where a recessed linen shelving unit will be installed. 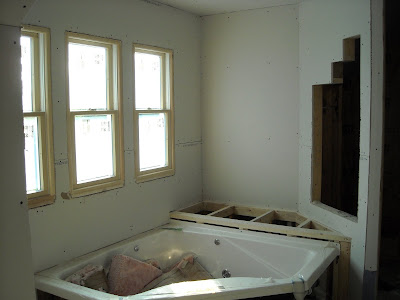 Standing in the original bathroom looking into the new space, here is the window wall, tub, and the cut-out for the glass block. Below is the right side of the closet/dressing room. 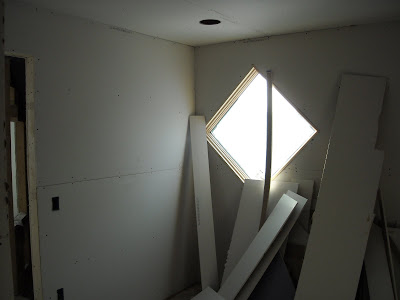 Here is the left side of the closet/dressing room: 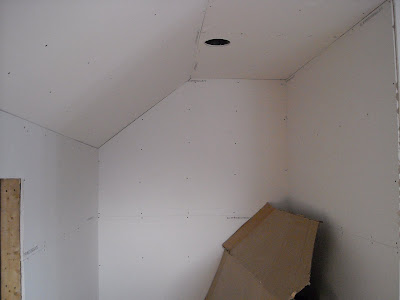 While the drywall crew was busy inside, Mike the builder, Jay and Junior were busy outside installing the reclaimed tongue-and-groove wood ceiling in the portico above the side door: 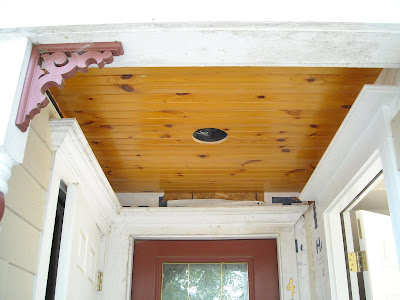 and painting the scallop siding. 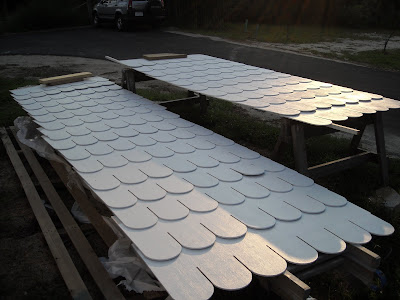 Thurs: The end of the porch ceiling got its siding applied: 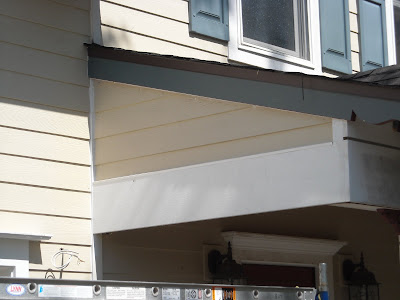 as did the wall inside the portico: 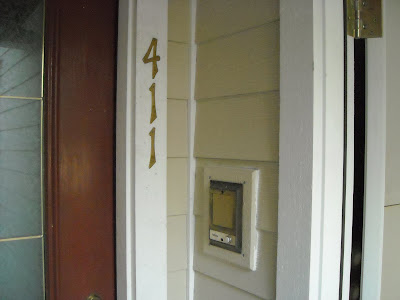 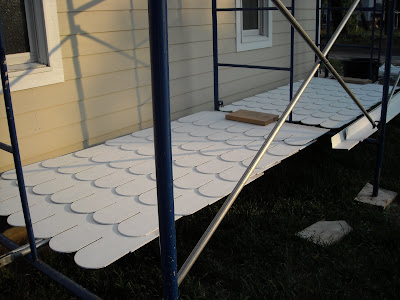 Fri: The trim was painted and installed on the inside ceiling of the front porch. 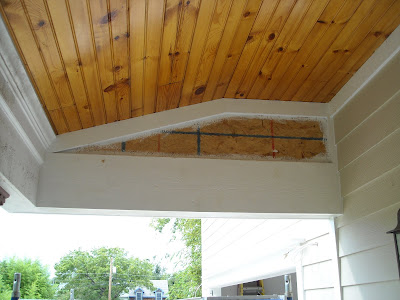 The foyer and powder room drywall was replaced. 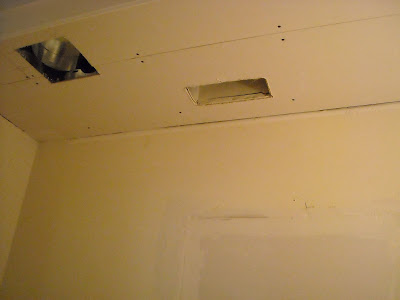 The foyer and powder room ceilings had been opened up for HVAC and plumbing access.

I can't get over how different it looks now that the drywall is up. Its much easier now to feel the dimensions of the new spaces. Next week the drywall finishing will take place, which means lots and lots of drywall dust.
Crush du Jour: Tom Duer 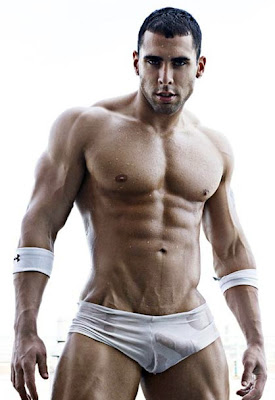 Email ThisBlogThis!Share to TwitterShare to FacebookShare to Pinterest
Labels: addition

your SO butch when you talk construction!! :-)

That drywall makes a big difference, for sure. It all looks so good, including the hunk du jour.

I love the ceiling in your porch. Ours is like that. Unfortunately we had a carpenter bee find it this spring and it bored about 6 holes before we saw what was going on and killed it. So now it's a holy ceiling.

That ceiling is so pretty! Everything is coming together so well and looks great.

I actually know about drywall because I went with a drywall contractor for several years. What a body he had! (and mind - oh yes, good mind, too, and personality) :-)

Looking great! Can't wait for the stained glass windows to go in.

The finished product is going to look amazing!

Big progress! Looks great - and so does the Crush! :)