When our friends Kerry & Hugh were visiting recently they were in the kitchen as I opened up the cabinet where we keep the peanut butter. Hugh asked "How many jars of peanut butter do you have in there?" I rolled my eyes and replied "I'm not sure; let's count them" as I pulled them off the shelves.

"One, two, three, four. We have four jars of - wait a minute! I think there's one in the fridge, too." Sure enough, I produced yet another jar of peanut butter from the door of the refrigerator.

"It appears we have 5 jars of peanut butter, all of which have been opened." I confirmed.

As the laughter subsided, Kerry asked if they were different varieties, like chunky and creamy.
I confirmed all 5 were creamy.

Anticipating their next question, I cut them off at the pass: "No, I don't know why we have 5 opened jars of peanut butter. Its really bordering on asshole behavior, isn't it?"

"Asshole behavior... what's that?" Kerry asked with a chuckle.

"Asshole behavior is the actions or behavior that would commonly be associated with someone considered to be an asshole" I defined, to even more laughter. "Wouldn't you agree that opening a new jar while the previous jar still has peanut butter in it could be a mistake once, but that doing it 4 times is dangerously close to asshole behavior?"

We laughed more and more as all 3 of us got into it by coming up with additional evidences of asshole behavior:

Can you add anything to the list of asshole behaviors?

Totally unrelated side point #1: Today is Feb 11 and it is currently warmer outdoors than it is inside our house.

Totally unrelated side point #2: This week's weigh-in was heartening, as I lost the 2 lbs I gained last week from eating all those french fries. So now I am back to where I was 2 weeks ago. 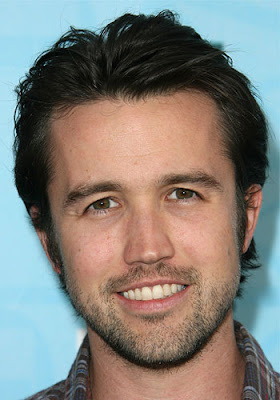 Not sure it qualifies as asshole behaviour, but Brad never, EVER, puts a beer cap in the garbage. He just leaves it on the counter or wherever he happens to be when he opens a beer.

And congrats re the weight loss! :)

Believe me I've run into so many assholes during my life it's hard to select the perfect example.

There's one, when they let me go from the Sec State's office they said that I didn't understand the structure of the office.

I shot back structure requires direction and there was precious little of that coming from their camp.

And yes, Rob McElhenney is a cutie. I love It's Always Sunny in Philadelphia.

asshole behavior lol, I think some of those could be... in any case they were pretty funny. Plus you should be careful about the peanut butter, theres a salmonella outbreak in peanut butter here in the U.S.

Awesome blog by the way.

asshole behavior lol, I think some of those could be... in any case they were pretty funny. Plus you should be careful about the peanut butter, theres a salmonella outbreak in peanut butter here in the U.S.

Awesome blog by the way.

"Using the last of the toilet paper and/or paper towels and not replacing the roll" --GUILTY!

Carlos has one: for whatever reason he refuses to open a new "anything." He will squeeze out the last pimple-sized dollop of toothpaste, that fits on ONE bristle of the toothbrush, rather than open a new tube.
Same with deordant.

Oh damn. I think you covered it all.

How about making a statement and the person you're speaking to opposes your statement or idea just for the fuck of it. They themselves will know that I'm right, but decide to disagree for no apparent reason.

I'm one for debate, but this particular asshole behavior gets under my skin.

PS. Thanks for the kind words in responding to my comment on your blog.

Your crush is...less. Unless he's funny and then that's a different category.

A really apropos asshole thing is to send an email ordering the shipment of what you've been informed may be salmonella-tainted peanut butter. Or does that clearly cross the line into "evil"?

Is there a difference between asshole behavior and being a dick? If so, how do you discern that difference?

I always call the right turn lane the asshole lane. That's where people try to shoot out ahead of everyone instead of getting in line at the red light.

I just looked and we have five jars of peanut butter too. All creamy but only 2 are open ; )

I have a filthy mind. I was waiting for the explanations for having so many jars open and the answer wasn't what I expected. Shame on me.