Sun evening when Spouse & I were having pizza with Steve & Thad we had the most overly attentive, overly familiar, waitress in the world! She was really just too much.

She must have asked to refill our drinks a dozen times. Call me cynical, but if you're a waitress and you look at someone's glass and its still 3/4 full, why would you ask if they want a refill already? Its still 3/4 full!

Seemingly 10 minutes after we began to eat she asked us if we needed a take-home box. Um, no, we're still eating. After the 2nd time she asked if we need a take-home box, Steve said to us after she left our table "Look at us. Do we look like we don't finish our meals?"

She must have asked if we were "doing okay" 2 dozen times. I wanted to say "Yes, we're still doing okay. If we need anything we'll get your attention during one of the 8,000 times you pass our table", but instead I just smiled and said "Yes, thanks." Then she said "Okay, I just wanted to make sure." Make sure??? As if maybe we really don't know if we're doing fine?

Granted the restaurant was less than 1/2 occupied so she didn't have a lot of customers requiring her services. But that doesn't give her the right to harass people who are trying to eat and talk. It seemed like every time we'd get into a conversation about something she was there to interrupt with questions about refills and take-home boxes. I felt as if I needed to talk really fast so I could finish my statement before she returned.

The clincher is when she came to our table while we were talking about Whitney Houston's new album and how she doesn't sound the same due to all that screaming "Bobbaaaaaaayyy!!". Uninvited, the 17-year old (or so) waitress says to me "Aw, you shouldn't talk that way about me" and smiled.

I had no idea what she was referring to. I just looked at her for a minute, puzzled, and said "What? I wasn't talking about you." What I really meant was "I wasn't talking TO you."

Then she had the gull to say to me "Oh, you really are a true blond. I was just joking with you!" and walked away. I cocked my head to the side, blinked a few times, and said to my dinner companions "Oh, no she betta di'nt!!!"

Obviously, there were multiple things wrong with that:

One thing is for sure: if she is our waitress again some day, I will have to find a polite way to tell her to back off or else she's not getting a tip! 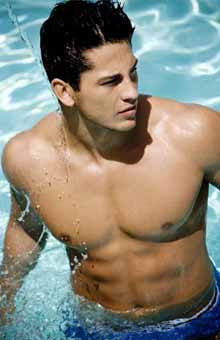 I like good service. But OVER service can be just as annoying as no service at all.

And, I don't like when the wait staff feels the need to be overly friends, join in on the conversations etc. Last year on my birthday the waiter did that. I swear I thought he was going to pull up a chair and join us.

I once actually had a waitress slide into the booth across from me to "chat." (I was on a business trip and so eating solo.) Imagine my discomfort when I realized she was flirting with me. Fat lot of good it did her.

It is so hard to find good help! I think you are right in that she didn't have much experience and didn't know the appropriate level of professional and social interaction to have with her customers. She'll learn eventually. I was 17 once and said lots of inappropriate things too. I hope to grow out of it someday.

Oy! That type of personality drives me crazy!

I bet she was very young, right? And trying just too damn hard. At the end of the meal - or maybe even in the middle of it - Tank the Control Freak prolly woulda pulled her aside and given her a little lesson on how good service people do their jobs most effectively.

I have no problem leaving a zero tip if the service is either overly bad or borders on the overly friendly like you had.

When they ask I'll tell them why they didn't get a tip.

You could also ask the host(ess) to NOT be seated in Reina's section next time. I'm all about conflict avoidance.

I was a waiter for years so I hate bad service but I also dont approve of OVER service....She needs a new job...Sounds like the poor dear is just a big spaz....maybe she was on some speed or something...What a pain! You should of told her --thanks for the service but to leave you all alone and stop being a over bearing spaztic!

I hope you didn't leave her a good tip.

We have this overly friendly waiter at a place my friends and I eat rather frequently. He even pulled up a chair one time and continued the conversation! We try to avoid him now and ask not to be seated at one of his tables.