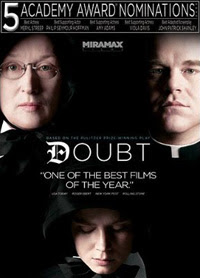 A few weeks ago Spouse & I sat down to watch a DVD from Netflix. The title was "Doubt" and we were eager to see this award-winning film.
I popped the DVD into the player and suddenly remembered the trouble we had watching the last DVD. It would play for 5 minutes and then freeze. The remote wouldn't work nor would the buttons on the face of the DVD player. The only way to resolve it was to turn off the DVD player, wait a few seconds, then turn it back on and skip through the chapters to resume where we'd left off. This occurred so many times in the past DVD viewing that I had my 'doubts' about our ability to watch "Doubt". Sure enough, within a few minutes of starting "Doubt" the same thing happened, so we just watched TV instead.
The following weekend I remembered that we had another DVD player in the attic, which had been in our 'beach house' before we lived here, so I decided to swap out the defective DVD player with the 'spare' one. I grabbed a DVD that was handy (not "Doubt") to test out my reconnection efforts of the spare DVD player, and was a little surprised that it worked!
I took the broken DVD out to the trash but since the construction dumpster was closer, I simply tossed it into the dumpster.
Several weeks passed without any time to watch DVDs. In fact, every weekend in Sept and Oct is booked for us, plus our week's vacation in Portland, the car club events this week, and weekend visitors. So last Sun we were relaxing after having returned from Portland very last Sat night, and I thought we should watch "Doubt". Only, the DVD envelope was empty.
I looked behind the TV and between the sofa cushions to see if it had somehow slipped there, but didn't find it. For a moment or two I was dumb-founded. How could I have lost a DVD?
As I often do when something is missing, I mentally retraced my steps to determine when/where was the last time I had handled the DVD. That's when the sickening thought came to me: the DVD was still in the old DVD player I'd tossed in the dumpster.
Fortunately I had not thrown the DVD player in the trash, which had been picked up since I threw away the old DVD player. The dumpster had not, so I tried to climb into it. Yes, dumpster diving at its most literal level! But it was too tall and I did not have a ladder.
When Junior and Jay came to work on the addition on Mon I explained to Junior (who is about 25 years old and slender) what had happened and asked him to climb into the dumpster and get the DVD player. I showed him where I stood when I dropped it in so he wasn't searching the entire 20x10 dumpster.
Within just a few minutes he located the DVD player and extracted "Doubt" from it!
I thanked him profusely and offered to buy him a 6-pack, but he said he didn't drink beer. I asked what else I could do to show my thanks and he said I could buy him lunch. I opened my wallet and suggested he 'should be able to have lunch on this' as I handed him some cash.
He was happy and I was happy. It was a win-win situation.
Crush du Jour: James Wilcox 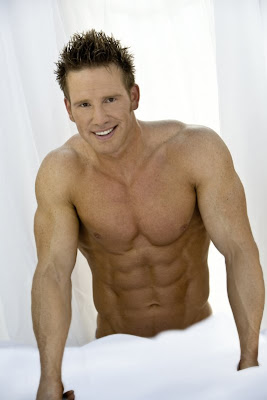 Email ThisBlogThis!Share to TwitterShare to FacebookShare to Pinterest
Labels: DVDs

I once took a VCR to the repair shop with an "adult" video still in the machine. About two hours later a rep from the repair shop called and said the machine was fixed. She said I'd left a tape in the machine and I felt my face go hot when I realized what tape it was.
The she said that she was "family" and had placed the tape in a brown apper bag for me.
Oy!

I find that many of the Netflix discs are dirty &/or damaged. Before I place one in my player, I clean it with Windex to save frustration mid-movie.

I've never left a tape/DVD in a VCR/DVR, but did have a habit for a while when I was doing a lot of traveling to leave CDs in rental cars. Thankfully, I could make copies with iTunes.