Highlights from the weekend

After returning from our failed curtain shopping we decided to put on Christmas music and put up our Christmas tree. Spouse's attitude had improved, and there's not a whole lot that can go wrong with putting up the tree.

It actually went faster than I expected. Spouse pulled all the branches out of the big box and placed them into piles according to the labels while I put the stand and 'trunk' together and began attaching the branches. We were done in just a few minutes. Then we strung the 6' tree with 4 strings of white lights, plugging in each string first to be sure they worked.

Later that evening we went over to our friend Ray's house for our monthly movie night. Once a month we gather at a different friend's house and watch a movie chosen by the host. They usually have snacks and drinks too. We watched "Postcards from the Edge", starring Shirley MacLaine and Meryl Streep. It was written by Carrie Fisher and basically leaves the viewer to conclude that its the somewhat unflattering story of Debbie Reynolds and Carrie Fisher. I'd seen it when it came out in 1991, which is fine because I often appreciate things during the 2nd viewing I didn't notice or appreciate during the 1st. Scott had made homemade baked goods and sent everyone home with a loaf.

On Sun Spouse & I went to an art show and sale. A local glass artist named Deb Appleby hosted about a dozen Delaware artists at her glass blowing studio. There were so many beautiful and interesting things to see it was almost a bit of sensory overload for me. Spouse & I decided to buy a large blown glass bowl as our Christmas present to each other. 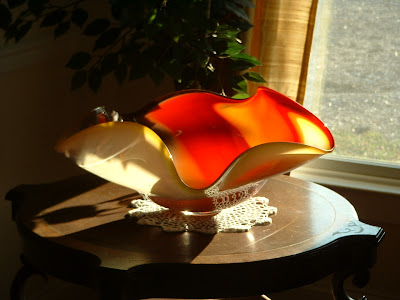 It was marked down because it was imperfect. There is a small flaw and a tiny hole that was sealed; both of which are unnoticeable unless you're looking for them. When the artist soothed her conscience by repeating twice that the piece was imperfect, I replied "That's okay. People are imperfect too, but they can be beautiful anyway, and we still love them. That's how I feel about this piece. It may be imperfect, but its still beautiful and I love it anyway." She smiled and said "I'll have to remember that."

Our friends Rick & Nick met us at the art show and sale, and the 4 of us decided to have lunch together when we were finished. I picked Ruby Tuesday's because I really enjoy their 'Garden Bar'. Spouse & I made a stop at the greatest dollar store in the world before heading home.

When we got home Spouse & I unpacked all the boxes and bags of ornaments and decorated the tree. Somehow I seemed to remember each ornament that had been a gift from a friend, and I thought of each person as I hung them on our tree. I called a few of these to Spouse's attention so he could remember them with me.

After an hour or so I guess Spouse started losing interest and began making comments like "I think it looks great. You know, we don't have to put all the ornaments on the tree." I sensed he was done, even though there were more ornaments on the coffee table. Rather than have a disagreement over it, I simply said "Yeah, it does look great. But I'm just going to add a few more toward the bottom where its a little bare. You don't have to stay here with me if you don't want." Grateful for the respite, Spouse watched TV in the TV room while I continued in the living room until I had indeed put up every single ornament.

The tree looks wonderful, almost magical. We both like glittery, sparkly, mirror-finished ornaments so you can imagine 400 white lights and over 200 reflective ornaments. I turned the overhead light off, leaving just the lit tree and the fireplace burning. I felt a sense of completion, calm, and warmth. I closed my eyes and made a Christmas wish.

Drag Queen name of the day: Sarah Nade
Posted by Mark in DE at Sunday, December 09, 2007