Welcome to Friday fragments, my weekly recap of topics too big to forget yet too small to be their own post.

The blogs and facebook were ablaze with reports that VP Biden commented that GLBT people should have full equality in America including marriage.  Then, apparently unplanned, Obama said in an interview with Robin Roberts that he believes GLBT people should have marriage equality!  I am encouraged by this.  It has been my suspicion that Obama has felt this way all along but did not feel it prudent to make such a proclamation earlier, what with the conservative republicans at his throat every minute.  Fortunately he has now put it in the record and I can only hope it will help to smooth out the way for equality in the years to come.

I saw this on facebook and had to laugh.  Just look at his eyes! 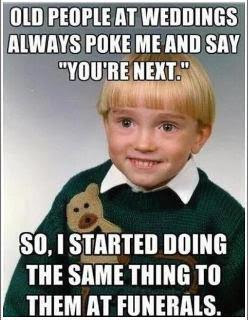 I'm starting to really get excited about the upcoming Legends shows, which will start Memorial Day weekend.  I will be performing every other Sat, as I did last year.  I am retaining 1 of my Legends from last year, Neil Sedaka, and adding a new Legend: Elton John.  I had to go for a special costume fitting where they measured practically everything on my body!  Apparently my EJ costume is the most expensive of all the costumes for this year's show and can not be altered, so it has to be custom made to my measurements.  Guess I'd better lay off the Dunkin Donuts so I don't gain any weight!

This sums up my feelings on so many 'controversial' political topics: 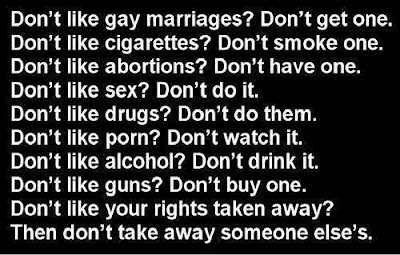 Spouse & I will travel to VA this weekend to see his mom (and family) for Mother's Day.  I'm looking forward to having a delicious dinner with them at the Taco House!

Tonight I am singing 1 song in the Blue Moon Divas Show, a drag show that runs every Fri night.  The Rehoboth Idol contest will be starting in a few weeks and they want to promote the competition by talking it up and having me sing during the Divas show sing I won the contest last year.  I'm singing 1 of the songs I sang in last year's competition: Laughter in the Rain.