Getting on my last (vagus) nerve

Yesterday in the wee hours of the morning I woke up to roll over and felt very dizzy.  I thought it was very odd but didn't really want to continue thinking about it so I went back to sleep.  An hour or so later I had to get up to pee and was extremely dizzy, to the point that I had to brace myself on the way to the bathroom just to keep from falling over.  I sat down to pee and thought to myself "Oh no, PLEASE let this NOT be another flare up of my vagus nerve..."  But by the time I stumbled back to bed I could feel the tingling sensation beginning in my hands and forearms.

I gently woke Spouse up to tell him I was having a flare up.  He asked if I needed him to do anything and I said no, I just wanted him to know what was happening.  I managed to fall back asleep for a while despite the horrible dizziness and waves of nausea.  The only "treatment" for this condition is to lie as still as possible.

I woke up again when Spouse got up to get ready for work.  Fortunately it was my scheduled day off, since I had worked Sun.  Spouse asked if I was okay and I said no.  I asked him to bring me the plastic trashcan from across the room "just in case".  When he brought it over I made the mistake of turning my head slightly in his direction and saying 'thank you', and that was all it took.  I grabbed the trashcan and started vomiting. 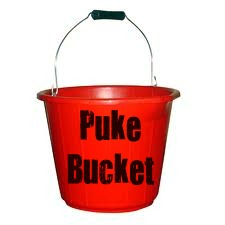 Spouse asked me a couple times if I wanted him to stay home with me.  I told him no since there's nothing really that anyone can do to make it better.  It just takes time - usually somewhere between 12 and 24 hours - for the symptoms to subside.  So he left for work and I dozed on and off.

Around 11:30 I woke up and realized I had to pee again.  What a dreadful thought!  Just turning my head made me vomit earlier.  How was I going to get myself to the bathroom to pee without puking?  I wasn't.  So I slowly sat up and lowered my legs to the floor as the whole room spun like an out-of-control merry-go-round.  I grabbed the puke bucket and stumbled toward the bathroom, bumping into the walls and trying to stay upright.  I fell to my hands and knees in front of the toilet and puked right into the bowl.  Since I'd already brought up what little food was in my stomach the 1st time I puked, there was nothing left in my stomach but bile.  Each time I dry-heaved, I could feel a little bit of pee come out, so I got up onto the toilet and began to pee while I dry-heaved some more into the trashcan.

I had tears coming down my face, snot running out of my nose, sweat glistening from my body, and the taste of bile in my mouth.  Pretty!!!

After a very brief attempt to clean my face I returned to bed with the puke trashcan.  Feeling as though I might need it again soon, I didn't want to put it on the floor where I'd have to lean over really far to get it, so I set the can on the bed next to my leg.  Fortunately I was able to get a bit of relief by dozing off to sleep again.

I gave up.  With my eyes still closed I reached for my phone on the nightstand and pressed the voice-activated dialing button on the side of it.  "Call Spouse - work" I said.  When he answered I briefly explained that I'd made a mess, was sorry, but wondered if he could come home and clean it up and help me get to the bathroom again.  He agreed and came home.

What a trooper!  Without a complaint he cleaned up the spilled puke in the bedroom and wiped up the pee sprinkles in the bathroom.  I can't imagine trying to recover from this horror only to then have to clean up my own vomit.  Plus I puked 2 more times after he got home so having him close by to bring me a damp towel was wonderful.

I spent the entire day in bed.  Around 7pm I felt like I might be able to get up so I did, only to relocate to the sofa in the TV room.  I sipped a little bit of water and was finally able to keep it down, then graduated to a couple bites of vanilla pudding.  I started feeling sick again so I laid down on the sofa and closed my eyes until the waves of nausea passed.  I went to bed at 9pm.

One of the things thought to be a trigger for this condition in some people is dehydration, so I am committed to drinking more water.  I know I should do it, but I often drink coffee in the morning and nothing else throughout the day.  No more!  My goal is 6-8 glasses of water per day in the hopes of avoiding this in the future.

holy shit! I sometimes get like you described during an asthma attack; it ain't pretty. but aren't loving spouses wonderful during a crisis?

and yes, you DO need to drink more. this is something I also struggle with on a daily basis. but it's good for me AND you!