I 1st discovered I was allergic to dogs after continuing to have itchy, watery eyes at my friend Charles' house.  His dog was allowed to roam freely and be on the furniture.  Eventually I found that sitting at Charles' kitchen table allowed me to stay longer before the symptoms started.

So when we got Jordan 1 of the conditions was that she not be permitted to get on the furniture or bed.  It took a little while for her to adjust to this since she had 'ultimate freedom' in her previous home, but she eventually got used it.  Every once in a while though she would sneak up on the sofa when we were out and I would get itchy, watery eyes. 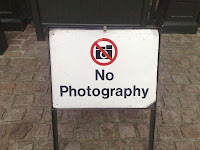 And then came Marvin Parker.  The 1st day we got him we knew it was important for him to bond with us so we put an old sheet on part of the sofa so he could be 'with us'.  He was not content to stay on the sheet.  He was so happy to have a new home that he had to climb onto our laps and chests so he could be close to us.  As much as I wanted Marvin to obey the rules, I really felt we needed to allow him to be close to us.  So I braced myself for the symptoms to begin and tried to minimize them by washing my hands frequently.

What I found was a welcome surprise: I don't appear to be allergic to Marvin!  I guess different breeds of dogs have different dander.  Or, maybe all those years of being around Jordan helped me develop a tolerance.  Now I hold him, pet him, and love him like a 'normal' pet owner.

Marvin Parker is breaking the rules and I couldn't be happier about it.
Posted by Mark in DE at Wednesday, May 30, 2012