A visit with the vet

This afternoon I took off work early to take Jordan to the vet. It had been a year and a 1/2 since her last exam and I also had some questions for the vet regarding some new behaviors and developments. She was very good during the exam - not restless like Pouncer always was. 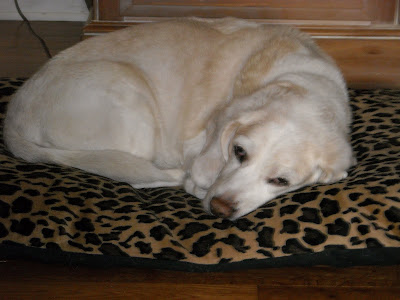 We've had Jordan for 14 years. When we got her from the beagle/basset hound rescue league we were told she was 2 years old, but when we took her to the vet the 1st time the vet suggested she was likely older than 2. The vet explained that rescue leagues tend to under estimate dogs' ages because they think everyone wants a young dog. So at a MINIMUM Jordan is 16 years old, but is probably more like 17 or 18. That's 119 or 126 to you and me!
Overall the vet was impressed with Jordan's general health and condition considering her advanced age. However we left the office with 2 different kinds of antibiotics; 1 for a suspected infection around 1 of her back teeth, and another for a suspected infection at the base of her tail which the vet characterized as 'canine acne'. Additionally we were given a solution to flush out her ears (typical for beagles and basset hounds) and drops for the small, fleshy tumors around her eyes. The vet also expressed her anal glands and trimmed her nails.
I know it sounds like a lot but all of the treatments are only for a week; then they're all complete and she'll go back to not having any medication or treatment at all. Not bad for such an old girl!
The vet saw no reason why Jordan wouldn't be with us for several years to come.
Posted by Mark in DE at Thursday, March 31, 2011

I sometimes feel like we worry too much -- with Mason. We subscribe to our vet's monthly maintenance program that affords him all of his office visits and a bunch of other things. And we go so much. So much! I'm glad we both have the ability to make a difference in both of our pet's lives. They need us. It has taught me so much. Give the old girl a kiss for me....right on her head.

She's a sweetheard Mark! I hope you have many more years with her. I had my Horace for 16 years. Four years longer than normal for a Pomeranian. That's 112 years old for our buddy.

Glad that the visit went well. Amazing how we all seem to remember the line that Lorne Green used to deliver on the ALPO commercials "back in the day."

Hi. I have a labrador the same as yours, also about the same age. But so still active.
Almost a child to me.
i hope to hear from you
Jan Vos and Bas from the Netherlands.
janvos2064@gmail.com

Jordan looks quite comfy there. Having pets is much like having children. They are a lot of responsibilty and expense. But well worth it. Sounds like many of the things my vet suggests and does.

are your vets as expensive as ours?

She reminds me of Sara. I hope she toughs it out a few more years.