Company
My cousin Inez (we call her Nez) and her husband Steve are coming to visit this weekend. I'm embarrassed I can't even remember when the last time was that we saw each other. Maybe 4-5 years ago? We've talked on the phone and IM'd since then though. Nez & I are less than a year apart in age and spent a lot of time together when we were kids and teenagers. I'm looking forward to their visit!

Commando
The other day I went 'commando' for a few hours. I had on flannel pajama pants (without underwear) and a t-shirt, but realized I needed to walk the dog. Rather than putting on underwear for a 20 minute walk around the neighborhood, I just slipped off the pjs and put on jeans, sans underwear. I felt a little 'naughty', knowing I was walking around town with no underwear. I kinda liked it.

Ted Haggard
Speaking of naughty, a friend sent me this (obviously doctored) photo of Ted Haggard, which I just had to share. As usual, click to enlarge. 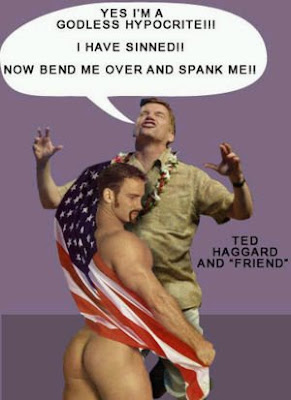 Not the same
You may have read earlier this week that Nevada is trying to implement a domestic partner registry that will grant most of the rights of marriage but without the term 'marriage'. Then on Wed I had yet another discussion with some gays who feel that 'as long as we get the rights, who cares what they call it'. I had to remind them, as I have many others, that separate is never equal. We will not have equal rights if we are granted separate rights from our hetero counterparts. I swear, sometimes I get weary from trying to help people understand this. Then I read the following on Facebook, written by a hetero woman, and had to share it:
"There are lots of differences between a 'committed relationship' and legal marriage. The ability to represent my spouse is very convenient… at the bank, in court, applying for a loan, discussions with creditors, medical professionals, even changing the cable package. These are mundane things that most take for granted. What about the stuff that really matters? Medical emergencies? Right of survivorship? Benefits earned as a part of your pay? To claim your spouse's dependent as your dependent? To co-parent adopted children? Marital privilege in a court of law? None of those issues have to do with sex or lifestyle; granting these benefits to all adults does not diminish the sanctity nor deplete the rights of hetero marriages. Those who oppose equal rights are guilty of tyranny." This momentarily restored my hope.

While conservatives may like this because it appears to be making fun of Obama by ridiculously comparing him to Jesus, I find this hilarious, and not that far off the mark! 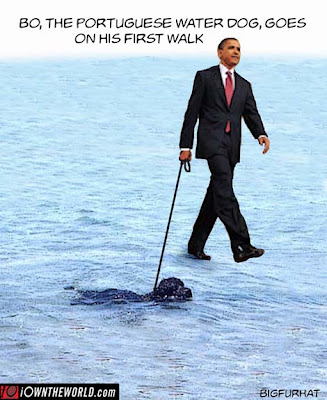 Then there's this Obama float... 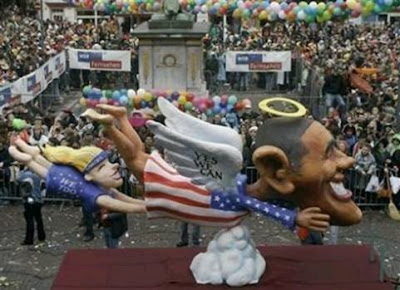 What is the blond girl holding onto???

Big Ella
It seems Spouse has become obsessed with protecting Big Ella. You'd think it would be me, since she's my girl. Whenever we go somewhere in her and I park, he always has to give me suggestions about where to park that will have the least potential for someone damaging her, as if I hadn't already thought of that. Then there's his latest: he now wants us to pay $120./month to store her at a public storage facility. I said that if we were approaching winter, I'd consider it, but since it is spring, I didn't see the need. Knowing we did not yet have a garage, we agreed we'd keep a car cover on Big Ella after she was repainted to protect her from dirt, sun damage, pollution, bird poop, etc. I believe that is sufficient.
Salad and chocolate
I have noticed that whenever I eat salad as a meal, I always crave chocolate afterward. I wonder what the connection is? Its as if my dark side is saying "You think you're being healthy by eating that salad, eh? Well now I'm gonna make you crave something fattening! Muah-ha-ha-ha!!!" 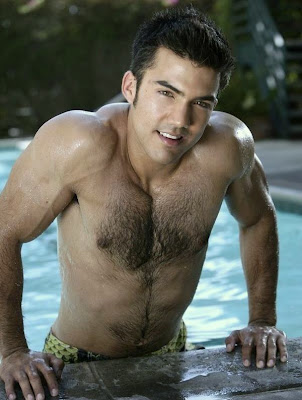 Okay, first things first: the toolbox thing. I have never noticed this, or thought of this, but now I feel a crazy need to sniff a toolbox....and not a good toolbox, if ya get my meaning. I can only imagine the look on Carlos'face if he caught me nose deep in a bundle of pliers!

All in all, have a GREAT weekend.

Love this post and all the pics..I think I'll snatch the Obama float one, if you don't mind.

I inherited my Dad's old metal toolbox and to me it reeks of gasoline.

I go commando all the time. Even still I get the "I'm such a naughty guy!" thought but it passes quickly.

That said, I know for a fact that lots of I.T. folks go commando. Here's how I found out.

Back when I was I.T. Director at the state AG's office it was me, my network guy and our female web master sitting at a server console trying to fix a vexing Outlook Web Access problem.

I don't know how the subject came up but I know it was my network guy that started it. He mentioned he was going commando and I replied that so was I. I think it shocked both of us when the female web master said she too was going commando.

Another thing about I.T. people, we're the biggest mooches around. At the AG's office we even had two way radios for everyone in the I.T. unit and there was a standing order that food locations be radioed back.

As to Big Ella, yeah she's a real beauty. You've got to protect that.

Today's crush is cute and sexy!

I've never noticed that about tool boxes but am now trying to remember how many of them I've been around.

WTF with that float? LOL

I can't believe you think you were going commando by not wearing underwear under pajamas!

Try it in jeans next time, and go out in public-- THEN you're an official naughty boy!

Chocolate is one of the food groups though, isn't it?

The float picture is funny.

As far as storage it seems to be quite popular here as well. I see new facilities going up all over town. My next door neighbor and my brother as well both say they have storage units for some of their crap. Would Big Ella even fit in a modern storage unit? It seems $120 a month would go a long way on a monthly payment for a garage of your own.