Let's play a fun little game called "Sitcom or Reality?" Here's how it works: I'll describe a situation and you tell me whether its a plot from a sitcom or the reality of my life.

'Mike' and 'John (not their real names) finally decide to enter the 21st century by replacing their 20-year old, boxy 19" TV with a big, sleek hi-def flat screen.

Being the 'organizer' that he is, Mike tells John they must first move the 19" boxy TV from the TV stand onto the floor of their main level TV room so they'll have a place to put the boxy, extremely heavy 32" that's coming downstairs from the 3rd floor.

With me so far? 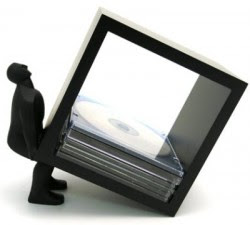 As John begins cursing, Mike tries to think of a solution. Too bad they didn't buy those shoulder strap thingies as seen on TV when they saw them. But Mike had figured they'd never use them. When would he or John ever need to haul a refrigerator or a heavy TV? Oh, that's right. They've done BOTH within the last 2 years! 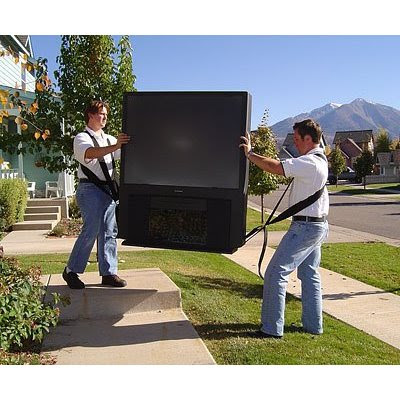 John suggests it would be easier to remove the window screen and shove the boxy, extremely heavy 32" out the 3rd floor window and buy another TV for that room.

But then, Mike thinks he's got the solution! He remembers that when they had to move those 2 (yes, 2) refrigerators they'd bought a hand truck, which really helped a lot. Since Mike had worked in a warehouse a thousand years ago he as all too familiar with how to use a hand truck. So Mike and John go down both flights of stairs to the storage closet to get the hand truck.

Okay, here's where its about to get really hilarious again... When Mike finally wrestles the hand truck out of the storage closet, he finds one of the tires is flat!!! (Insert gut-wrenching laughter here.)

John becomes just as deflated as the tire, while Mike scratches his chin (not really, but that phrase conveys a thoughtful attitude) while trying to think of a 'Plan C'.

"We can still use the hand truck, even though one of the tires is flat and the other is very low." Once again drawing on his past hand truck experience, Mike continues "It will be harder to roll, but it will be easier than trying to carry that monster." Just like the Hardy Boys, they nod in agreement and carry the hand truck back up the two flights of stairs.

They slide the behemoth off the TV stand and onto the hand truck, then pad it with a blanket to protect the screen. Mike pushes down on the hand truck while John lifts from the underside to get the weight onto the (flat) tires.

Okay, here comes another crazy-funny part... Before they can even start to move the awkward TV, the hand truck's (flat) tires get caught up in a scatter rug!!! (Insert boisterous belly laughs now!)

This time it is Mike that begins cursing, since it was John's idea to buy that stupid little scatter rug (that Mike felt didn't match) in the first place. They struggle for what feels like hours to free the (flat) hand truck tire from the rug. "Finally!" Mike exclaims.

The duo gets the unstable TV across the room to the top of the stairs. Mike says that he'll continue 'driving' the hand truck, what with all his hand truck experience and what not, and suggests that John go down the stairs backwards in front of the TV to stabilize it. John looks at Mike with a 'hello, NO!' look on his face, but realizes he is sorely lacking in hand truck experience, so he silently concedes.

They begin the decent down the stairs, slowly, one at a time, and are a little relieved that it is going well so far. Mike decides to bolster John's confidence by making occasional encouraging remarks, such as "That's it... you're doin' great."

John responds with a not-so-encouraging "Shut up." They continue their decent, slowly, one stair at a time. When they get to the bottom Mike can't help himself, and exclaims "That was great! We're half way there!" John groans.

Another throw rug is kicked from the hallway into a bedroom to prevent the hand truck from becoming ensnared again. They glide down the hallway, turn the corner, and stop at the top of the second stair case they must navigate.

"Its not going to fit", John says in his ever-so-charming 'glass-is-half-empty' way.

"Its got to fit", Mike responds. "This stair case is the same size as the one above it that we just came down." But as they began their decent onto the top stair, it becomes evident that somehow John was right, and they are going to have to pull the hand truck back up onto the landing.

"We're gonna have to put it on a blanket and slide it down the stairs", John laments.

"WHAT??? Slide it down the stairs???", Mike asks incredulously. "Don't you think that would be kind of like sliding a gigantic boulder down the stairs?" There's silence for a few seconds until Mike comes up with 'Plan D'.

"Let's turn it around a quarter turn, so its longer than it is wide. It will fit down the stairs if we do that" he says confidently. "But you're going to have to hold the side so it doesn't tip over, because its going to be much heavier on one side than the other." John grumbles but agrees to try it.

Okay, prepare for another hysterical part here... After turning the TV a quarter turn on the hand truck, Mike is unable to push the handle down because he's backed up against a bookcase - the very bookcase that John never wanted put in the landing to begin with!!! (Insert wild guffaws here.)

So, after sliding the bookcase out of his way, Mike gets the weight of the TV back onto the hand truck and he and John begin their decent down the second stair case, slowly, one step at a time. This time Mike resists the urge to utter encouraging comments until they get to the last step.

"Only one more step and then we swing 'er around to the left" he says. And just as the hand truck drops from the last step onto the floor, the TV starts twisting. Mike's eyes become as big as saucers as he realizes there's nothing he can do. He can't reach the TV because he's still up on the stairs, behind the hand truck.

Fortunately, John scrambles and practically slaps the TV to keep it from tumbling off the hand truck, onto the floor. 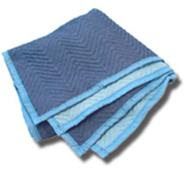 "We're done with the stairs. Now let's slide this thing into the TV room on the blanket", John recommends. So they roll the hideously heavy TV onto the blanket and scoot it across the wood floors, careful not to scratch them. Once in the TV room, they muster up super-human strength, just like the Incredible Hulk, to hoist the TV up onto the TV stand.

By this time both mens' clothes were several shades darker and practically dripping with sweat. 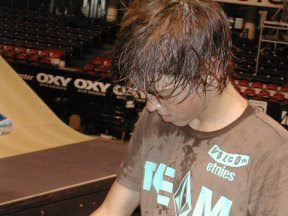 But they weren't done yet! They still had the sleek, new 52" flat screen to haul up two flights of stairs. Fortunately, it was a mere fraction of the weight of the boxy, extremely heavy 32" foe that had them glistening, and not in a good way. The documentation says the flat screen weighed 79 lbs, but it felt as light as a feather after their previous ordeal.

Without incident they climbed both stair cases and placed the sleek, new, 52", hi-def temptress onto its stand. Thank god the cable guy was coming the next morning to switch out the cable box for a hi-def one. He would have to connect the TV to ensure everything worked properly.

So there you have it! Now its time to play the fun little game. Leave a comment and tell me if you think this is a sitcom or reality. 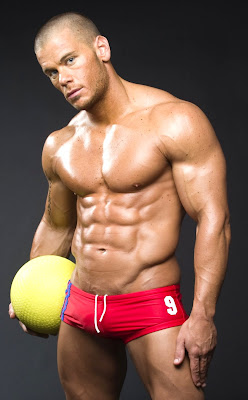 Three things to say:
(1) Reality.
(2) The boys in Delaware have too much fun.
(3) I like that sweaty t-shirts and young thing with stringy hair picture you posted.
Oh, wait...4 things:
(4) We're trying to hook up with your Newlywed friends.

Were you Mike or John?

I'm crushing on that red package.
If you guys can afford a 52" hi def then you could afford to have it delivered and installed the way I see it.;) No I like to struggle, cuss, adn sweat, around the house too. Good job boys!

Wasn't this an episode of Three's Company?

Yeah, I can see Janet and Chrissy huffing and puffing and sweating until they dripped whilst schlepping an enormous extremely heavy TV down the stairs. In high heels.

Nah, it has to be real. Sit-coms aren't that good.

I like this game. I have a few scenarios that might fit this format pretty well. It's amazing how funny my life would be if someone else were playing the part of ME.

I fear for the marriage of this Reality TV couple. ;)

Well this certainly explains the title of your blog, lol.

But at least its done... and you got your new big TV. So no bitching.

Almost certainly reality (for someone).

Your story gave me nightmares as I am about to replace my heavy CRT television with a flat screen version and have been worried for weeks about the difficulties involved.

I bet the #9 nails it right on the head, no pun intended. (okay, maybe just a little bit!)

Sounds like fun! I've got a few of those moments in my life too. Like the time I helped a friend dig the hole for his new bulkhead. 810 cubic feet later we had it dug.

Or trying to get our washer/dryer combo up a set of narrow stairs. That didn't work so well.