Tonight our friends Bugsy & Roger and Mike & Clark are coming! They'll be visiting through Sun, and we've been looking forward to their visit for several months, since we scheduled it.

Of course that means we're doing a major housecleaning. We did some on Sun, a a little Tues evening, and a little last night. Today will be my big 'vacuum and dust the entire house, yes, all 3 floors'.

We met Mike & Clark in Oct of 1997 at a financial seminar for gay couples. We happened to sit at the same table and found that we lived in adjacent neighborhoods. They are great guys and we've been friends ever since.

We met Bugs & Roger in Aug of 2003 through Mike & Clark. After meeting in Aug, we became fast friends and the 6 of us spent a great week's vacation at the beach together at the Outer Banks of NC in Sept. Good times!

We don't have any specific plans for their visit, which is fine by me. I've taken tomorrow off work so I will hang with the guys, doing whatever they want, be it outlet shopping, antiquing, walking, or just sitting around talking and laughing. The talking and laughing part is a given!

After Spouse comes home from work on Fri the 6 of us will go out someplace nice for dinner. Sat night we're going to a Halloween costume party at our neighbor's, which should be fun. I've heard rumors that their Halloween costume parties are legendary, with prizes! Mike & Clark and Bugsy & Roger have not revealed their costumes to me, rather preserving the full affect for when we're together in person. Spouse & I have not yet settled on our costumes, since we have a few ideas that can easily be pulled together.

I hope I remember to take pictures. 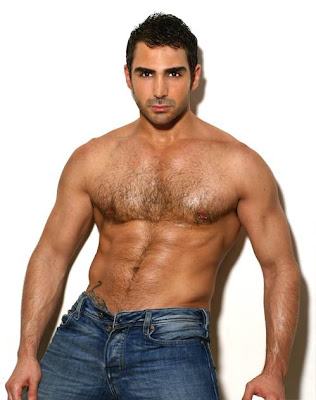 Email ThisBlogThis!Share to TwitterShare to FacebookShare to Pinterest
Labels: Bugsy and Roger, housecleaning, Mike and Clark

Have a wonderful weekend!

Sounds like you guys have a super weekend lined up. Enjoy!!!

Sounds to be a lovely weekend.Halloween is my favorite holiday and I just love costume parties. Have fun!

And we're STILL trying to connect with The Newlyweds.... I may have misplaced their email.... maybe you could send it to me...
happy weekend!

Sounds like a fun-filled weekend. Hope you all have a blast! And LOVE your crush. He goes by Arabian Fella on Big Muscle.

I am completely shattered by men from the Mid East. Wow.

Have a super weekend with your mates!