He doesn't know it yet

On Sat Spouse & I decided to try out the new Ledo's Pizza that just opened near us. It was after the lunch 'rush' so there weren't many tables occupied.

After being seated by the chunky hostess we were greeted by a young guy who introduced himself as Scott and said he'd be taking care of us today. He wasn't particularly good-looking, but he was handsome enough. He asked if we'd ever eaten at Ledo's before and we explained we'd eaten at 2 Ledo's locations back in VA and liked it, so we gave this new one a try. He asked where in VA so I told him the Columbia Pike location in Arlington and the Leesburg Pike location in Falls Church. He asked because he was from VA and had worked at 1 of the VA locations, although neither of the 2 we'd visited. I asked him where he lived in VA, and when he responded Spouse reminded me that was close to where my cousin lives. When Scott smiled he instantly became at least 50% more handsome. Its amazing how smiling can really change some people's appearance!

Scott took our order (we knew what we wanted before we sat down) and when he returned with our drinks I asked him what brought him to DE from VA. I assumed he would say something like college. He said his relatives have owned a beach house for years and that his immediately family came to stay in the beach house a lot during the summers. He liked it here so much he moved here when he graduated from high school last year. He started living at one of the many campgrounds near the beach. When it got too cold to stay at the campground and the management turned off the water for the winter he and a friend moved into a "place" (he didn't specify if it was an apartment or what) in Laurel.

He went on to say that he worked at the Tokyo Japanese Steakhouse when he 1st moved here. I commented that when it was being built I wondered who would want to eat at a Japanese Steakhouse at the beach. I thought tourists would choose one of the many seafood restaurants over a Japanese Steakhouse when vacationing at the beach, but that I'd been wrong. The parking lot is always full at Tokyo. Scott offered that eating dinner around the hibachi grill was like dinner and entertainment, so it appealed to vacationers, which then made sense to me. He explained that he left because of the tip sharing policy; he just couldn't bring home enough to pay the bills.

I noticed that Scott looked directly at me and Spouse when talking to us, and that he possessed the composure and decorum of someone well beyond his 19 years. He spoke to us almost as peers, even though we are more than twice his age, and it didn't feel at all inappropriate. I didn't get a gay 'vibe' from him, neither did I get a particularly straight 'vibe' either. He wasn't flirty or forward, just very open with us.

He excused himself to check on our pizza, and after he'd walked away Spouse looked at me and said "He's totally in love with you."

At first I found this hard to believe, but Spouse is a therapist and has an amazing ability to accurately 'size people up' in seconds. He's proven this on many occasions and is never wrong, so I have come to trust his assessments.

Naturally I was flattered that a 19 year old would find me, a 44 year old, attractive. But I am often mistaken for being younger than I am, thanks to good genes and clean living. Spouse is mildly annoyed that people always assume he is older than me, despite the fact that I am 8 months older than him. I tell him that people may think I'm younger, but they think he's more handsome.

Another potential contributor to my youthful appearance is my hair and the way I was dressed. My hair is cut in a 'fauxhawk' like this: 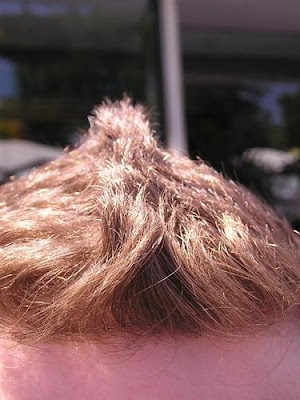 but mine has blond highlights. I was wearing jeans and a graphic short-sleeve T over a long sleeve T, kind of like this: 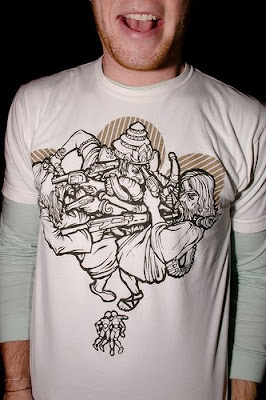 (photo snagged from Flickr) Fortunately this doesn't seem to look out of place on me.

When Scott returned with our order we chatted with him some more, while waiting for the pizza to cool. Turns out he works at Ledo's during the day and another, higher-priced restaurant at night. He began telling us about his favorite entrees and desserts at the other restaurant, and once again we were surprised by his maturity, even in his food tastes.
After settling the check Scott thanked us for coming in, and we thanked him for the great service and interesting conversation. We wished him luck dealing with all the tourists this summer, and he thanked us and encouraged us to come to Ledo's again as well as the other restaurant. He was never flirty or inappropriate; he just sounded sincere.

When we got in the car Spouse said "You know, he's going to remember this. One day soon he's going to think about talking to us and hope he sees you again." I knew what he meant. I remember working in a retail store as a young closeted gay man, meeting customers whom I thought might be gay and hoping they'd come back to the store again. The thought that I might be that for Scott, even though he didn't know it yet, made me feel special. 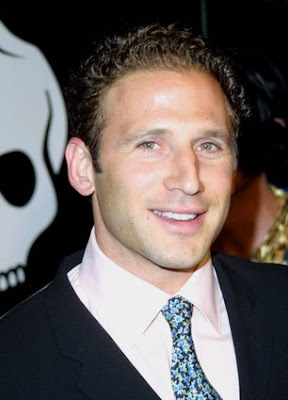 I so wish I had hair to faux-hawk. And that 19 year olds found me attractive. You lucky boy, you!

i am so with you on the retail thing. many a boy never came back, but a couple of them did.

But I'm having difficulty imagining what you look like (despite the very clear description). I think a photo is in order!

I love this story! I find it fascinating that someone like your Spouse can size up another person so accurately. Sometimes I can see those kind of things, sometimes not. I had a friend years ago who could zone right in on something like that. She was a lot of fun to hang out with.
I hope this young man has an easy time becoming aware of who he is and can be true to that.

Great post, rich in descriptive detail. I almost feel like I was at the next table, eavesdropping on you guys.
Isn't it wonderful when strangers collide and make a little music, however brief and inconsequential it might be?

That must have felt good! And you could have just taken a picture of your own hair ; )

Very cool! Love it when a lad is so very nice and also genuine. What a great feeling.. but I am sure you get theat often you handsome devil!