Not exciting but enjoyable weekend

The weekend started with our regular Fri night dinner with the 'usual suspects' at the Dirty Finger restaurant. Its not actually called that, but that's our nickname for it after a friend reported that he was served by a former waitress with dirty fingernails. We've eaten there many times since and all the wait staff's fingers appear clean!

Sat morning we went to a fundraiser/question and answer session with Jack Markell, held at the home of some friends of ours. Jack is the current Treasurer and is running for the Governor's position in the fall.

He seems very down-to-earth, and I liked his slogan "You talk; I'll listen." He's got some smart ideas on his website, and is VERY up to speed on GLBT rights. We enjoyed the time with Jack, as well as the informal brunch after Jack left for his next meeting.

Spouse & I went grocery shopping in the afternoon, and then went to Steve & Paul's house for Movie Night. Once a month we get together with a group of guys to watch a film picked by the hosts. We saw "The Country Girl", starring Bing Crosby, Grace Kelly, and William Holden. It was good.
Sun Spouse & I ran a few errands, had lunch, and then I worked on gathering our tax information for the accountant for 4 hours while Spouse took a nap and watched TV. Does anyone else see anything wrong with this?
After dinner I helped Spouse reformat his resume and construct a cover letter for another job for which he wants to apply. (He found out he didn't get the one for which he interviewed in Feb.) Then we watched "Notes on a Scandal". While I'd give the overall film 4 out of 5 stars, I thought Judi Dench's performance was spectacular. He subtle nuances and facial expressions were right on point for her character. At times I forgot I was watching an actress.
It wasn't an exciting weekend, but it was an enjoyable one.
Crush du Jour: Dwayne Johnson (aka: The Rock) 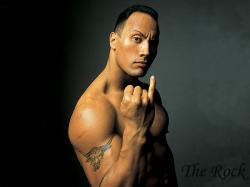 the rock is giving you a dirty finger

ps - the notes on a scandal book is sooo much better than the film....

Hey, we're in a zone! We just watched Notes on a Scandel last week. We both liked it a lot. Dench was super as usual. Have you seen "Tea with Mussolini"? That was a good flic, too, with Dame Judi, Joan Plowright, and Cher. "Ladies in Lavender" was another...

Wow. Redoing a resume and a cover letter. What an exciting existence. No really.

Re: da Rock
This is one of the few times I disagree with your taste in crush du Jour. Your man Dwayne looks micro-encephalic. Not a sexy look, IMHO.