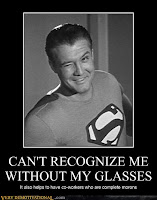 Although I've tried to remain somewhat anonymous on this blog (no last name, no specific city, etc.) at Spouse's request, I've always secretly wished someone would recognize me as this blog's author.

Occasionally I read accounts of other bloggers who are recognized at bars or restaurants and I think how fun it would be if that happened to me. Well, something similar happened to me, finally, after more than 6 years of blogging.

In January I went with my friend Hadley to an after-Christmas party where I met Andy. In our conversation I told him I was in the process of changing careers and was excited about becoming a realtor. After the party I friended him on Facebook, and then I saw him again a few weeks later and we exchanged greetings.

Then recently I got a message from Andy via Facebook. He said he'd been reading my blog for almost a year, without knowing who I was. Then as he was catching up on my blog after the party he realized that we'd met each other at the party in Jan.

So although I wasn't recognized in public like by fellow bloggers, I was recognized after the fact, which kinda makes me feel special.
Posted by Mark in DE at Tuesday, April 05, 2011

But ya are, Blanche, ya are special!

I've been recognized but for some reason people are afraid to approach me about it.

Maybe it's because I have a sort of stern look when I'm out in public.

You ARE special! Something I knew the first time I met you.

I LOVE the "Blanche" comment (I just read it after my "special" comment). You're still special in my book! Don't worry Joe..er Spouse. I'm not coming on to your honey. I think he's a nice guy (just like you).

And now you know what it's like. And you didn't get a creepy stalker vibe (like I got from my last "recognizer")