I've written several times about my interest in and support of alternative fuel vehicles.
First came the gasoline-electric hybrids like the Toyota Prius and Honda Insight. They utilize both an electric battery powered engine and a gasoline powered engine at the same time. The battery is never exhausted because it is constantly being recharged, however it is constantly using the gasoline engine as well.
Then came the gasoline-electric hybrids like the Chevrolet Volt. It begins by using just the battery powered electric engine until the battery runs down (about 40 miles per charge), then the gasoline engine kicks in to recharge the battery. In theory, a family could run most if not all of its daily errands (up to 40 miles) each day without using any gasoline or creating any pollution.
But what really excited me is what came next: the 100% electric Nissan Leaf. 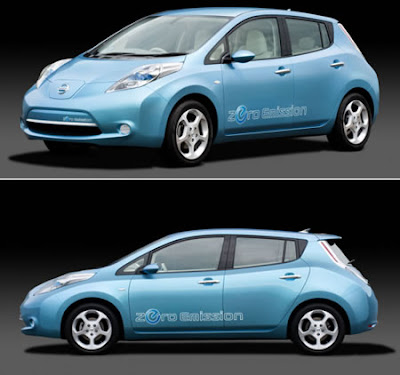 The Leaf does not have a gasoline engine so it emits zero pollution and requires zero fossil fuels. Who knew zero could mean so much? Each battery charge should allow the Leaf to go 75-100 miles, depending on who you believe. (Nissan says 100 miles; the EPA says about 75.) Here's their latest commercial illustrating the 'value of zero'. 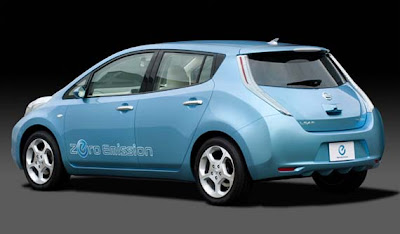 Obviously there are pros and cons to all 3 vehicle types.
The Prius could be a person/family's sole vehicle because it does not depend on the battery life. Therefore it can be used to commute to work, run errands, and be driven on a cross-country trip.
But how many families have just 1 car?
I love the fact that the Leaf never uses any gasoline (the price of which fluctuates for seemingly no reason at all) and produces absolutely no pollution! While you can't take it on a cross-country trip, you certainly can commute back and forth to work every day, and probably run a few errands on the way. Just plug it in at night and let it charge back up.
Just think of all the money you'll save by NOT filling up a gas tank, paying for oil and filter changes and tune-ups! And while it does cost money to recharge the Leaf's electric battery, the cost of electricity is cheaper than the cost of filling up a gas tank. And, one could install a solar panel to utilize the sun to charge the battery for free.
Most couples and families have 2 cars, so I think we should all consider keeping a 'regular' car for long range driving, but purchase a Nissan Leaf for daily commuting and errand running.
Its good for the economy and good for the earth.
Posted by Mark in DE at Thursday, April 14, 2011

I WANT it!! It's cute and I'm sick of giving money to the Oil/Gas co. I hope it's affordable for everyone and not just celebrities to show off in.