Our buddies Mike & Clark and Ron & James arrived Fri at 4:30, just moments after Spouse got home from work. We had martinis on the screened porch and chit-chatted until we were hungry, then had drinks and a wonderful dinner at Saketumi. I had a spicy Volcano roll and a California roll. Mmmm! The guys really liked the food, service and atmosphere. Through my friend Chris, I had scored free tickets to 'Hurray for Hollywood', a female impersonator show by Christopher Peterson, so we went to the show after dinner. It was was fun, but very similar to the show he did 2 years ago. Afterward we went for a walk on the boardwalk and some of the guys got ice cream. It was a beautiful night to be out.

Sat morning Spouse went for his personal trainer appointment while me and the guys talked and drank coffee on the screened porch. When Spouse returned we had a light breakfast then we walked to the historical society where an antique show/sale was going on. Spouse & I bought an outdoor rug for our screened porch made of recycled plastic bottles. (It wasn't antique.) Then we

browsed some of the shops on Second St. We had a late lunch at Irish Eyes, then relaxed with cocktails on the screened porch and visited. Then we went on a sunset cruise up the canal, through the bay and out to the ocean. It was a gorgeous evening which further enhanced the beautiful scenery. Then we had a delicious dinner at Hobo's. I started with a pear/champagne martini and an appetizer of marinated fava beans with olive tapenade and flatbread. For dinner I had a wild mushroom and brie quesadilla brushed with truffle oil. OMG - it was so deelish! Afterward we went for a walk on the boardwalk and some of the guys had ice cream and funnel cake.
Sun morning we walked to JD's Filling Station for breakfast (I had pancakes), then sat and talked a little while until the guys packed up their gear and we said our goodbyes. We had a really great visit with our longtime friends. Since Spouse hadn't slept well the night before, he decided to take a nap and then go to the grocery store. I headed to the beach where I met up with friends and played 5 games of beach volleyball! It was so much fun! It was a gorgeous day (sunny skies, low humidity, moderate temperature) so it was really comfortable for playing. I also swam in the ocean between a few of the games and really had fun visiting with all the friends on the beach. It was a fantastic day! After returning home for a shower, Spouse & I met up with Steven & Thad, Jack & Alisha, Bob, and Joe P at the Purple Parrot for dinner. I had a pork BBQ sub. Steven & Thad had just returned from seeing Heart in concert in Atlantic City on Sat night so we heard all about the show. After dinner we enjoyed a short walk on the boardwalk then headed home. Spouse watched 'Ice Road Truckers' and 'Mad Men' while I watched 'Project Runway' on the DVR. I went to bed early (10:00) since I'd had such a full day with lots of exercise.
It was an awesome weekend!
Now... is it Friday yet???
Crush du Jour: Lorenzo Martone 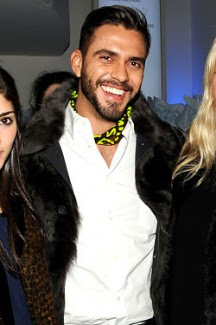 Did Irish Eyes serve traditional Irish cuisine, or was it just a name?

You make every weekend seem awesome. You have such a great outlook.