Breakin' up is hard to do

One of my favorite songs to sing at karaoke is "Breakin' Up is Hard to Do", the ballad version from the 70s, not the doo-wop version from 1962. Not because I particularly identify with the lyrics which are rather sad, but because the melody fits perfectly in my voice range. The piano accompaniment is beautiful too.

I don't particularly identify with the lyrics because they are a plea to a lover not to leave, which has never been an experience of mine. But I try to imagine when I sing this song what it would feel like to utter these words and really mean them, because that makes the song sound better and more authentic.

It seems rare that the decision to split up is mutual. Most often 1 makes the decision to leave in their heart long before the conversation is had between the couple. While breakin' up may be hard to do, it happens. Its hard on the 2 who are breaking up, and its hard on those who are friends with the couple. Its sad and it hurts. But life goes on.
Several years ago a couple with whom Spouse & I were friends decided to split up. For us this was no big deal because we liked 1 of the guys much more than the other, who could be accurately characterized as a 'loose cannon'. When they split up and it became known that they were not going to remain friends afterward, we knew we'd maintain our friendship with the 1 we had always liked best.
But just recently we learned that another couple with whom Spouse & I are friends have split up. It was not a mutual decision, but they claim they will remains friends. This means that we should be able to maintain our friendship with both of them, since we didn't have a clear favorite.
But what happens if/when 1 of them starts dating? Do you invite both halves of the former couple AND the 1 guy's new boyfriend to your party? Is that disrespectful to the single guy? Might he feel uncomfortable seeing his ex with a new man, especially since the single guy did not initiate the break-up? I want to include them both but don't want to upset either.
Of course a friend wants to be supportive of the 1 who did not initiate the break-up, lending them a figurative shoulder to cry on. But how do you react if they want to speak negatively of the 1 who left them that is still your friend?
Indeed, breaking up is hard on those who are friends with the former couple.
Like the former couple, I guess I will have to get used to the fact that they aren't together anymore and learn how to deal with it. Is there a song about that?
Crush du Jour: David Burtka 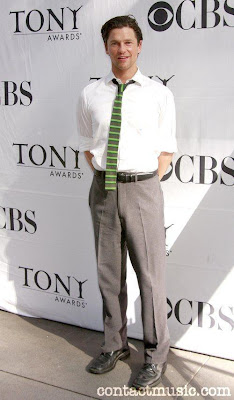 oooh thats a tricky one. I have never been broken up with, but I sometimes wonder what it would feel like. I would love to know the feeling that one gets when they think of their lost love whilst listening to sad songs.

that's walking a fine line there...I don't have an answer to the mutual friend breakup.

I initiated the breakup with spouse #1; he went on to marry someone else with whom he had children and he lives on the west coast. his oldest kid just graduated high school in june.

someone else initiated another breakup with me; I was not willing for it to end. I still wonder what might have been in that relationship...

and I like both versions of the neil sedaka song; I can sing the doo-wop version better now that my voice has changed (getting older and deeper). I can SO see you singing the 70s version in your wonderful voice! damn, if we evah meet there would have to be some kind of private singing going on because I DO NOT sing in public.

oh yeah, I could also teach the crush a thing or two about "singing" (just sayin')...

These are tough situations. One of my worst was when a couple broke up after 9 years. I met them as "a couple" so I had no loyalty to either one. I wanted to stay friends with both, but Bobby basically stopped being friends with me. I still miss him 6 years later.

"Do you invite both...?"
"Is that disrespectful to the single guy?"
I think it would be disrespectful to NOT invite one of them. Just let them both know that the other is invited and remind them you do not play favorites.

Mark, at first I would keep them separated as much as possible, to ease the transition, if they have a date and you think they could be hostile or it could cause tension. If not, just let both parties know that the former other half is coming as well and if they are bringing a date, that might be good info to pass on as well. After a while though it should be perfectly fine to invite both, even when they are dating or have established a new relationship, without saying a thing. All of this depends on how adult the two friends can act and what you are prepared to deal with as the host.