Yesterday evening I went to my new eye doctor for an eye exam.

I wasn't that thrilled with my last eye doctor so I took a friend's advice and made an appointment with her eye doctor. Once I got there I realized this new eye doctor advertises in the local 'Letters from CAMP Rehoboth' magazine, which is nice, and that he's also a friend of Dorothy.
Upon entering the exam room we exchanged initial greetings and then he noticed that my flip flops and t-shirt were the same color. "Did you buy them together?" he asked. "No, but I intentionally wore them together" I replied. "But that's a good idea... I should open a store on the boardwalk called 'Flops N Shirts' and sell flip flops and matching shirts" I suggested with a snicker. "I'm sure it would be a hit" he encouraged. From this exchange I knew we'd get along better than my old eye doctor who didn't get my sense of humor. 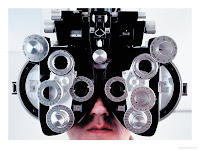 After several tests he announced that I don't have glaucoma, cataracts, or any other eye issues. Next it was on to the vision test where they flip the lenses around and ask you "Is 1 better than 2?" and "Which is clearer, 3 or 4?" I always find this tricky, as sometimes just blinking will make the same lens look different. But I got through it with less uncertainty than with my last eye doctor.

My new eye doctor advised me that was adjusting my prescription and suggested a similar but new contact lens. He provided me with a trial pair and I am finding them to be extremely comfortable. Plus the prescription adjustment was just the tweak I needed for additional clarity. I feel like bursting into song "I can see clearly now..."
Once the eye doctor kissed me goodbye (just kidding) I met up with 1 of the assistants out front to discuss my insurance and product choices. According to her, I have very good vision benefits which she indicated would be better used on glasses than contacts. This was just what I needed to know, since I really wanted new glasses.
My current eye glasses (which I never wear) are at least 6 years old and 2-3 prescriptions ago. They never fit me correctly (so I never wore them) and I don't know WHAT I was thinking when I picked them out. My pupils must have been dilated or something. Did I mention I never wear them?
The assistant picked out a dozen different frame styles and had me try on each one and tell her what I did and didn't like. With that info, she selected another dozen and I did the same thing. Lather, rinse, and repeat. Such service! I eventually narrowed down the huge selection to 5 very different frames and even got the input of the doctor and another assistant. I narrowed the 5 down to 2 that I liked equally. At that point it became a question of price, and the decision was made. I really like the new, modern frames and think I might actually wear these glasses occasionally just for looks.
Since my insurance covers glasses or contacts, I will simply order new contacts online and pay out of pocket for them. My new glasses should be ready in about a week. I'll try and remember to take a photo of myself in them and post it in next week's Friday fragments.
Crush du Jour: Marc Jacobs 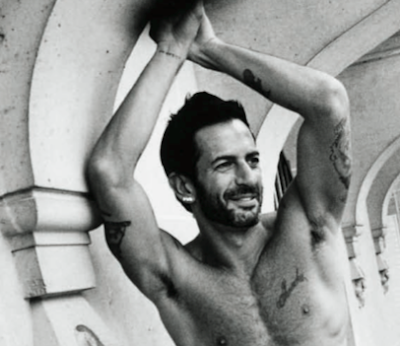 I love when you take a risk and go somwere new to get something you need and it just fits so perfectly.

My opthalmologist is a friend of Dorothy as well. He only does surgeries now but back a few years ago he actually asked me which bars I hang out in. I didn't have the heart to tell him we'd both dated the same guy.

meh on today's crush...but I wanna see the new glasses on a handsome man!

PS - I was checking out baking/pastry classes today (see yesterday's comments)...you have inspired me!

Before you get the glasses you need an eye exam. Try our free online eye exam www.eyeexamonline.com