We had a typical Sat morning with me drinking coffee and watching back-to-back episodes of "Sell This House" while Spouse had his personal trainer appointment. After a light lunch on the screened porch we went to the 'Resident Appreciation Day' at Steven's property. He opened the pool (although we didn't swim) and provided food, drinks, a raffle, toy give-aways, face painting, and fake tattoos for the residents of the property he manages. Spouse & I both had a hot dog and soda and I also got a fake tattoo around my bicep. It was a little crooked and began to fade in the shower but it was fun.
Afterward we donned our swimsuits and went to the beach. It was a beautiful day and we decided to go for a long walk on the beach. We ran into Rick & Nick and then Ted & Mark as we walked. Back at home I made my bean and nectarine salad and then we walked across the street to the neighborhood block party. There was lots and lots of great food and drinks and we enjoyed eating and visiting with the neighbors. When the 'Electric Slide' came on, a bunch of us joined in on the dance, although it was a bit difficult to 'slide' on the uneven ground. Afterward Spouse & I watched TV and I actually fell asleep on the couch, which is very unusual for me. Since I was tired I decided not to go to Mandance.

Sun morning we woke up to rain. So we met up with Bryan, Thatcher, PW, Steven, Rick & Nick, and Ted & Mark for breakfast at the Long Neck Diner. They have a great all-you-can-eat breakfast buffet. It was fun to relax and talk over breakfast knowing we really didn't have anything else planned for the day. Rick & Nick came home with us so Nick could troubleshoot and fix our wireless router. I had tried to reset the password but only successfully un-secured the darned thing. Within about an hour Nick reset the password and re-secured it and made sure our computers could successfully connect. The rain had stopped so Spouse & I walked the full length of the boardwalk in Rehoboth. It was cool and overcast but it was nice to get some exercise and look out onto the ocean. Back at home we relaxed and browsed online for a while, then met Bryan, Thatcher, PW, and Steven for dinner at Purple Parrot. Spouse & I are not thrilled with the food or prices there, but we joined them anyway since the others like the prime rib special on Sun evenings. Back at home Spouse watched 'Ice Road Truckers' and 'Mad Men' while I watched the MTV VMA awards.
Lady Gaga was there at the VMAs and her "Bad Romance" video won in several categories such as Best Female Video, Best Pop Video, Best Dance Video, Best Choreography, and Video of the Year. Here's a list of the winners. I was happy but not surprised, as I have been saying all along that this video is f'ing genius! She had on a different outfit/costume each time she took the stage. As she held up her long dress to walk up the stage steps she showed off those infamous Alexander McQueen lobster claw shoes: 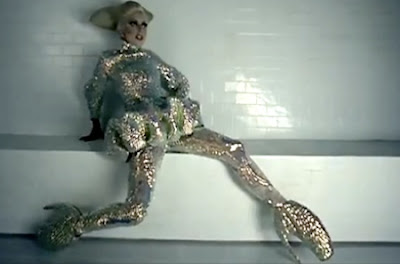 The Video of the Year award was presented to Gaga by none other than Cher in a remake of her skimpy 'Turn Back Time' costume. She said she was the 'oldest woman with the biggest hair and the smallest outfit' at the VMAs. That was pretty funny! Overall I enjoyed watching the VMAs this year and Spouse enjoyed the fact that he did not have to watch them with me.
Crush du Jour: Robert Mauro 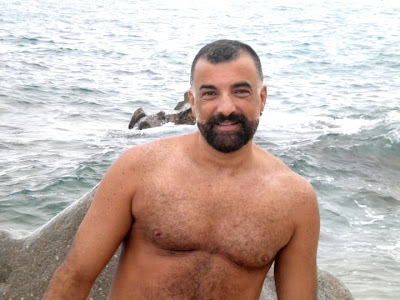 I'm sorry...very very sorry...but every time I read through your post and get to Robert Mauro I completely forget what you've written. I've read it four times! So all I'll say is *SWOON*.

me want the crushie next!

ain't it amazing that cher can fit into that outfit all these years later? AND still look smashing? I could never do that...