Don't ask, DO TELL your senators

A federal judge ruled that "Don't Ask, Don't Tell" was unconstitutional. This is a landmark ruling that will face a long and rigorous appeals process. In the meantime, we are now in a position for Congress to once and for all put an end to this discriminatory law. So, read on and call your senators NOW.

The Senate has a quick four-week session before they leave for the 2010 election. It's critical that they repeal "Don't Ask, Don't Tell" in this short window – and time is running out.
Lots of people believe that repeal is a foregone conclusion. But I need you to know: this is not a done deal. We've had to fight to the end for every victory we've won, and this is no different. If we don't speak up now, our window for repeal could close.
Anti-gay constituents are calling Senate offices with lists of right-wing lies: that open military service would increase sexual assault, trample on the religious freedom of military chaplains, and put "twisted sexual desires" ahead of national security.
We have a 100-senator strategy to make sure bigotry and deception don't win out just before we reach the finish line. It takes about 45 seconds to call each one of your senators and urge them to repeal "Don't Ask, Don't Tell" before they leave for the election. It's just as important for supportive senators to hear from us – they need to know we're counting on them to get a repeal to President Obama's desk this year.
You may never have called Congress. That's fine. It couldn't be simpler.
Before 5 p.m. ET, call both of your senators. If you don't know who they are or their phone numbers, click here. Tell each staffer who answers where you live, so they know you are a constituent. Then say: "I'm calling to urge the Senator to push for repeal of 'Don't Ask, Don't Tell' in the next four weeks, before the election." Most calls end right there, but if you'd like, you can add: "Americans recognize that on the battlefield, it doesn't matter whether a soldier is lesbian, gay or straight; what matters is that a soldier gets the job done. This law hurts military readiness and national security. It puts American soldiers at risk."
Be sure to calls BOTH of your senators.
IMPORTANT: After you hang up, click here to let us know that you made the call. This enables us to tell lawmakers just how many people have called.
Senate staff are accepting calls and keeping tabs on what constituents care about, so senators will know what to focus on when they return for this short, busy session.

The House has already passed a repeal of "Don't Ask, Don't Tell. This is the last step before it goes to President Obama's desk. So we need to turn up the pressure in the Senate to make sure our window of opportunity doesn't close!
Crush du Jour: Nick Ayler 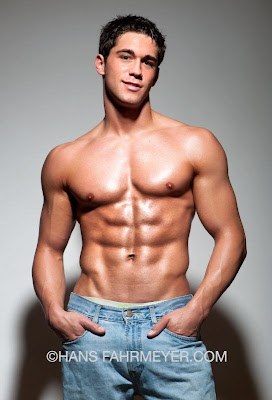 About time, don't you think?