Make Me a Supermodel finale

First off, Thank you to everyone who responded to my call for help yesterday, answering all 3 of my blogger-related questions. You guys are great, and really showed the love! It seems that everyone is having the same trouble I've had with finding a photo of Chad Lopez though.

Last night was the Make Me a Supermodel finale!

Out of the 4 remaining models, I was really glad when Perry was the 1st to be told "We can not make you a supermodel". Ben was the next to be eliminated, and I would have eliminated Perry and Ben in that same order.

I was a bit surprised to hear their whispered back-stage conversation that indicated their surprise that they were both eliminated and "Holly is still standing out there." HA! Shows how much those 2 know.

That left Ronnie and Holly. My preference would have been for Ronnie to win, but I was not unhappy that Holly won the $100,000., a year's representation by New York Model Management, and a fashion spread in GQ magazine. Of course she cried when she learned she'd won. And just as I'd expect, Ronnie was a true gentleman and sincerely smiled and congratulated Holly, unlike those 2 'sour grapes' Perry & Ben.

Ronnie is smart, good-looking, and mature. He will still have a great modeling career even without winning this competition because he knows how to go after it and get it. Its probably best for Holly that she won because I'm not sure her personality is strong enough to go after and get a good modeling career without having won the competition. She's a beautiful chameleon of a model who slips into whatever look and environment she's placed in, but I'm not sure she could get placed there without having won the competition. I would post Holly's photo but Bravo's Make Me a Supermodel website doesn't allow photo downloads.

The night before the final elimination, each of the remaining models got a surprise visit from someone special to them. Holly's fiance showed up and I was like "WOW - HE should be on this show as a model!" I was amazed at how fantastically good-looking, handsome, and sexy Holly's fiance was. What a nice surprise for the audience!

Now that Project Runway and Make Me a Supermodel are both over, my sole remaining 'must-see' TV show is American Idol. I guess I'll have more time for Netflix DVDs now. 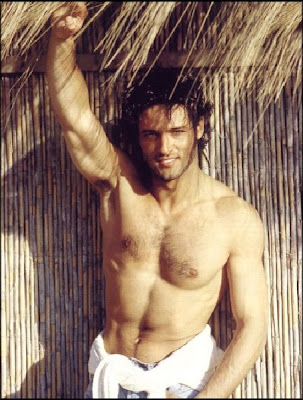