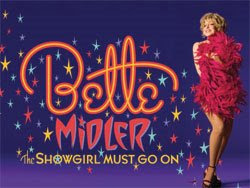 ...but not THAT kind of dream. My dream was about meeting the Divine Miss M herself, Bette Midler!

Maybe it was because this post was still lingering in my mind, I don't know, but I dreamed I went to Las Vegas to see Bette Midler perform at the Colosseum.

Now, I know the Colosseum is a large venue capable of seating thousands, but in my dream it was about the size of a school classroom. Indeed, in my dream it was as if we were all sitting in those chair/desk things with the lights turned off, watching Bette perform while lying on a sumptuously upholstered chaise lounge with a single spot light trained on her. I mean, we were all so close we could see her sweat. Only she wasn't sweating because she's Bette Midler.

When the show ended the 'classroom' lights came on and everyone began filing out the 'classroom' door. But I decided instead to tell Bette just how fabulous I thought the show was, so I made my way from my chair/desk thing to where she was standing, next to her chaise, in front of the chalkboard.

I told her how I'd seen and loved every one of her movies and concerts, and then piled accolade upon accolade, sometimes in multiples, until it seemed there were no more adjectives left in the dictionary, even the abridged one. When I finally finished gushing, she put her hand over her forehead and did a fake 'I'm going to faint' kind of gesture, and then thanked me for all the kind words. Then she smiled with that smile that makes her eyes squint so much you wonder how she could possibly see out of them and said to me "Well, aren't you just the sweetest." Realizing how totally star-struck I must have appeared, I became embarrassed and didn't know what to say.

Then she stuck her hand out at me and said "Come with me." I took her hand and she lead me threw the remaining people who had congregated outside the 'classroom'/concert hall until we walked down a dimly lit hallway that opened up into a larger, lounge-like room. The lounge room had several over-stuffed sofas and chairs, and there were people drinking and nibbling from plates of appetizers. I perceived this to be the VIP party, to which I'd neither purchased nor won tickets. But Bette walked me in and no one looked at me suspiciously.

When the VIP party guests saw that she had entered the room they offered her a round of applause, while trying to balance their drinks and plates on their arms. She threw them a large, sweeping kiss and then plopped down onto one of the sofas. She looked at me again with that squinty-eyed smile, patted the sofa cushion next to her, and said "Here, sit down."

I sat down, right next to Bette, and tried to keep myself from doing or saying anything stupid. Then she asked "So... what was your favorite part of the show?" and I froze. How could I possibly pick my favorite part when I think everything she does is fabulous? All she needs to do is stand there and I'd applaud.

And then I woke up. 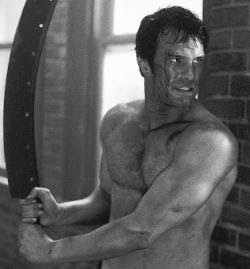 Hi there, not to be a nudge, but your crush du jour is Thomas Jane. Still very crush worthy.

Loving the blog too.