A 'plain' woman with mousy brown hair and frumpy clothes won't get the time of day, while men and women will practically bend over backwards for a pretty blond woman in form-fitting clothes.  It is a fact, and although everyone thinks its unfair, most of us do it anyway without really thinking about it. 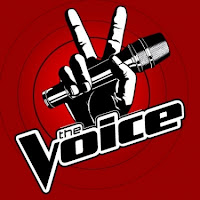 That's why I absolutely LOVE the show "The Voice".  Singers hoping to impress the judges must do so with only their voices because the judges can't see them.  The judges' backs are to the stage where the singers belt out their best so the judges CAN'T be influenced by the singers' appearance.  Its absolutely the most fair way to evaluate their singing.

I remember watching audition after audition on "American Idol" and being dumb-founded by the 'attractive' singers who progressed through the audition despite their pitch problems, while some really amazing singers were cut from the competition because they didn't "look like stars".  Oh please!  A Professional Stylist can make anyone "look like a star" but they've got to have the goods to back it up.

On this week's episode of "The Voice" there was this very attractive young man named Dez Duron who already looked like a star, with his fashionable hair and symmetrical good looks. 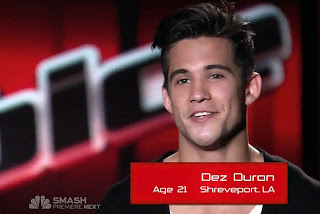 Yet none of the 4 judges picked him based on his voice.  Once they saw him they all wished they could change their mind.  Christina kept smacking her button to choose him but it was too late.  That would NEVER have happened on "American Idol".

So I'm becoming more and more interested in the results of this new(er) show since it seems much more fair.  They aren't looking for a model, they're looking for a great singer.
Posted by Mark in DE at Wednesday, February 08, 2012

Email ThisBlogThis!Share to TwitterShare to FacebookShare to Pinterest
Labels: American Idol, The Voice

While what you say is very true, it comes down to being able to entertain which is very visible. I don't mean just looks, I mean perform and sell the song to a live audience. There are more singers than entertainers and they are many entertainers who can't sing. It's a very hard combo to find/discover.

A great post!!!! I haven't seen this show yet, why is beyond me since Im huge fans of both Christina and Levine. But the concept will tell about is excellent. I couldn't agree more with what you said Mark!

Well, in the long run, talent is better than looks.