Sat morning I showered, dressed, fed the cat, made the coffee, and then checked my email. And there it was: the email notifying me that the MLK Jr parade had been cancelled due to the frigid temperatures. I was disappointed, but when I thought of the high school kids in their marching band uniforms that are not designed for single digit temperatures, I concluded that the parade organizers had probably done the right thing.

But the parade was literally the only thing we had planned for Sat. With it cancelled, and with the extremely cold weather, I feared Spouse & I would stay (warm) in the house all day long and be tempted to eat all day long.

To fill our time I thought about suggesting to Spouse that we each spend an hour or so cleaning and tidying up the house. Knowing Spouse I knew that suggestion would not be met with excitement, even though we both know it needed to be done. So, I did something a little devious instead.

I suggested to Spouse that, since it was a cold day, it would be great to make a big pot of chili or beef stew. He agreed that would be good, but we didn't have the ingredients for either. So I suggested we venture out into the cold to the grocery store and get what we needed. "What else have got to do today?" I asked, and he agreed.

On the way to the store I suggested we invite our neighbors Claudia, Jim & Barb over for stew and then watch a DVD about a storm that devastated our area in 1962. He agreed, then declared that if we were going to have people over for dinner and the movie, we'd need to do a little housecleaning. I agreed, and suggested it wouldn't take that long to whip the place into shape.

So, we cleaned the house and I didn't have to twist Spouse's arm into doing it. I got him to suggest it by first getting him to agree to have our neighbors over for dinner!

Feel free to use this 'patented technique' anytime. You're welcome.

So, we made a hearty and tasty beef stew with potatoes and veggies, plus 2 cans of Pillsbury Grands biscuits. Biscuits aren't that hard to make from scratch, but I don't think any taste better than Pillsbury Grands, so why go to the trouble and mess of making them yourself? Claudia, Jim & Barb enjoyed dinner, we all enjoyed our conversations, and then we watched the DVD.

Despite the cancellation of the parade, Spouse & I had a great day and a lovely evening, and we didn't snack all day long. 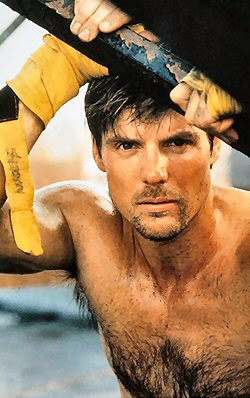 You just never know what the day will bring when we get up in the mornings. There's nothing like friends and good food.

You are so tricksy!!!

Sometimes a change in plans is good.