I kissed a Warbler

So, last night was week #2 of the Rehoboth Idol singing contest. The theme was songs performed on the TV show Glee.

I chose "One Less Bell". I've always liked this song, I already knew the words, and the song has strong emotional content so I felt I could use that to connect with the audience and showcase my vocal abilities. I practiced at home several times and really tried to implement Pamala and Telly's suggestions from the coaching session.

One of last week's contestants (Selina) didn't return this week but 2 additional singers joined, so now there are 5 singers in the contest. Since there are just 5 there will be no eliminations as there are in American Idol. Instead, contestants get points for vocal ability/intonation, appearance/stage presence, and knowing the lyrics.

Again Miss Richfield 1981 brought all 5 of us up onto the stage at the beginning to introduce us to the judges and audience, then we drew numbers to determine the singing order. Here's how it went:
While the judges deliberated in another room, Telly Leung performed the Glee version of "Teenage Dream" which was fantastic! I found him to be super talented and super nice. What a great guy!

When the judges returned Miss Richfield 1981 announced the results for week 2:
It was very exciting!!! 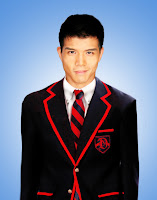 After the show I thanked Pamala and Telly for their invaluable assistance. Then I got an opportunity to meet and talk with Telly and his partner Jimmy. They were both so nice! Jimmy works in NYC but tries to accompany Telly when he can at appearances and performances.
I said that I wanted a t-shirt that read 'I met a Warbler', and then I thought what would be funnier would be a t-shirt that read 'I kissed a Warbler'. The 3 of us laughed, then Jimmy asked if I had kissed Telly yet. I said 'no', so Telly said he didn't want the t-shirt to be a lie so he leaned forward so I could kiss his cheek. I felt a little silly afterward, like a star-struck teenager, but it was all in good fun.

So 2 weeks down and 2 weeks to go, and I'm in 1st place. Now I really feel the pressure to practice, know the lyrics, and sing well to keep hold onto my position. After all, $1000. cash and future paid singing opportunities are at stake!
Posted by Mark in DE at Thursday, June 09, 2011

are you going to share these performances with us!? Please!!!

COOL!!! Your stage presence is great!