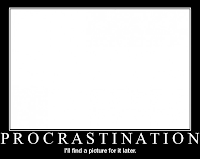 I have the tendency to procrastinate when it comes to unpleasant tasks or things I just don't want to do. You'd think that dealing with the consequences of procrastinating a few times would cure me of the habit.
Take for instance the time I got a parking ticket for accidentally backing into a parking space with a sign that read "Front end parking only". (It was dark and I didn't see the sign indicating the unusual request.) When I found the ticket on the windshield I muttered something vulgar under my breath and shoved the ticket in my pocket. Later the ticket was pulled from my pocket and laid on the dresser, where it sat for a few weeks. I saw it every day and kept telling myself I needed to pay it, but didn't. When I finally went to pay the ticket I found that the fine had doubled because I had not paid it by the due date.
But in contrast, I've also found that sometimes procrastinating is good! I remember finding out that I had accidentally double-booked myself to be in 2 places the same weekend. I knew I needed to tell 1 or the other person that I could not make it after all, but I procrastinated. Then, a week before the double-booked weekend, 1 of the people told me they'd need to cancel our weekend together because he had to work on Sat unexpectedly. My procrastination allowed me to avoid the uncomfortable cancellation conversation, and prevented me from cancelling with the other friend, leaving me with nothing to do on that weekend. 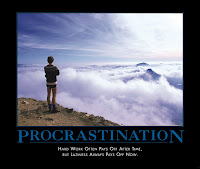 So although most people have a negative opinion of procrastination, I am not so sure it is entirely deserved. Maybe its one of those things that just isn't black-and-white. Maybe instead of thinking that procrastination is always a bad thing, its more realistic to take each situation on a case-by-case basis. Obviously there are some things like paying bills that should always be done on time, while other things like social over-commitments could wait to see if they work themselves out.

Perhaps having a rule against procrastination isn't necessary. Or perhaps I'm simply justifying a bad habit. What do you think?
Posted by Mark in DE at Wednesday, December 29, 2010

Email ThisBlogThis!Share to TwitterShare to FacebookShare to Pinterest
Labels: procrastination

Procrastination is an inborn character trait. I have it too. It's one of the reasons I have two dead computers in the garage; I've procrastinated about getting rid of the via e-waste roundups.

Oh I think every one of us has a little bit of the proscrastination bug in our character. While I would never proscrastinate paying a parking ticket (what are they? Never had one he says), I still have unpacked boxes from my move to Delaware from Pennsylvania four years ago. I think I procrastinate if it doesn't cost me anything. Interesting subject you brought up.

I'll tell you what i think about procrastination later...