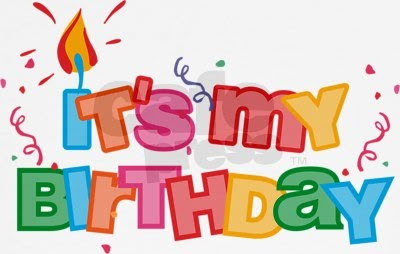 Yes, its true. Its my birthday today.
Since I'm not working and have very few demands on my time right now, I decided to do just what I wanted on my birthday. After showering and walking Jordan the dog, I put on some Christmas music, poured myself a mug of coffee (with eggnog instead of cream) and organized my Christmas cards and supplies on the kitchen table. I was going to spend the majority of the day writing and addressing Christmas cards! Its my thing.
But first I needed to get the laptop so I'd have the addresses. I brought it into the kitchen and decided to check my email before starting the cards, and there they were: tons of facebook notifications that people had posted on my wall! I began reading through all of them and responding, but they just kept coming. I mean, not that it was a 'problem', in fact it was quite touching that so many friends saw my birthday pop up on their facebook and decided to post on my wall. It really made me feel great!
Eventually I decided to stop responding to the messages for a while and get started on the Christmas cards. I sang along with many of the songs and made my way down the list of card recipients. It got about 1/2 of them done (about 70) and it was great!
I took a break to meet my friends Deb & Greer for lunch, then stopped at the grocery store to pick up a few things.
It was very cold out and Spouse had not mentioned going out for dinner for my birthday. (He'd suggested having a brunch this coming Sun for my birthday.) So we had dinner at home, which was fine since it was one of my favorites: spicy Thai chicken lettuce wraps.
We watched "Glee" then watched the last episodes of "True Blood" on DVD.
It was a simple day, but a great one.
Posted by Mark in DE at Tuesday, December 07, 2010

It's what you deserved, a day YOUR way!

Sounds perfectly splendid to me.

dammit dammit dammit! I didn't get to read blogs yesterday, so I missed your birthday! so sorry!

smooches to a fabulous guy!

Belated birthday wishes to you.