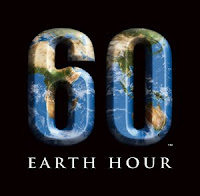 World Wildlife Fund is asking individuals, businesses, governments and organizations around the world to turn off their lights for one hour – Earth Hour – to make a global statement of concern about climate change and to demonstrate commitment to finding solutions.
Today, Saturday, March 28th at 8:30 pm local time, please turn off your lights (except while driving!) for one hour to demonstrate your support for the need for sustainable climate change efforts. Visit the Earth Hour website for celebrity PSAs, climate change details, Earth Hour t-shirts, and all kinds of other cool stuff.
We've only got one planet. Let's work together to save it.
Crush du Jour: Tom Hislop 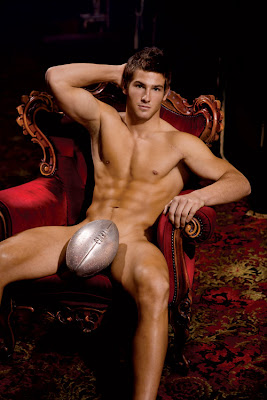 We are not even going to be home, but you bet all lights, electronics, maybe even the vacuum will be turned on

I wasn't aware of this. Thanks for writing about it. If everyone did this, wouldn't that be a neat view from above to see waves of darkness sweep across the earth?

I don't understand that comment above mine. Typo or anti-Earth Hour?

Why, oh why is that football in the picture? I think Joy is right. It would look neat from space

Joy- No that was not a typo, it's more like a power hour.

The fundamental goal of environmentalists is not clean air and clean water; rather it is the demolition of technological/industrial civilization. Their goal is not the advancement of human health, human happiness, and human life; rather it is a subhuman world where “nature” is worshipped like the totem of some primitive religion.

If the good of man were the aim of environmentalists, they would embrace the industry and technology that have eradicated the diseases, plagues, pestilence, and famines that brought wholesale death and destruction prior to the Industrial Revolution. They would embrace free enterprise and technology as the only solution to the relatively minor dangers that now exist—minor compared to the risks of living in a non-technological world.

But by word and deed, they demonstrate their contempt for human life.

In a nation founded on the pioneer spirit, they have made “development” an evil word, attacking the man-made as an infringement on pristine nature. They inhibit or prohibit the development of Alaskan oil, offshore drilling, nuclear power—and every other practical form of energy. In the name of “preserving nature,” they undermine our quality of life and make us dependent on madmen like Saddam Hussein. Housing, commerce, and jobs are sacrificed to spotted owls and snail darters. Medical research is sacrificed to the “rights” of mice. Logging is sacrificed to the “rights” of trees. No instance of the progress which brought man out of the cave is safe from the onslaught of those “protecting” the environment from man, whom they consider a rapist and despoiler by his very essence.

Nature, they insist, has “intrinsic value,” to be revered for its own sake, irrespective of any benefit to man. As a consequence, man is to be prohibited from using nature for his own ends. Since nature supposedly has value and goodness in itself, any human action which changes the environment is necessarily branded as immoral. Environmentalists invoke this argument from intrinsic value not against lions that eat gazelles or beavers that fell trees; they invoke it only against man, only when man wants something. The environmentalists’ concept of intrinsic value is nothing but the desire to destroy human values.

“The intrinsic theory,” charges Ayn Rand, “divorces the concept of ‘good’ from beneficiaries, and the concept of ‘value’ from valuer and purpose—claiming that the good is good in, by, and of itself” (Capitalism: The Unknown Ideal, p. 21). But, in fact, she observes, “The concept ‘value’ is not a primary; it presupposes an answer to the question: of value to whom and for what?” (The Virtue of Selfishness, p. 16)

Values exist in a hierarchy, some being pursued only because they are means to other, higher ends. This implies the existence of an ultimate end that grounds the hierarchy. “Without an ultimate goal or end, there can be no lesser goals or means. . . . It is only an ultimate goal, an end in itself, that makes the existence of values possible” (The Virtue of Selfishness, p. 17). Things qualify as good or evil, valuable or detrimental, only insofar as they serve or frustrate the ultimate value; and the ultimate value is one’s life. “Man must choose his actions, values and goals by the standard of that which is proper to man—in order to achieve, maintain, fulfill and enjoy that ultimate value, that end in itself, which is his own life” (The Virtue of Selfishness, p. 27).

The expressed goal of environmentalism is to prevent man from changing his environment, from intruding on nature. That is why environmentalism is fundamentally anti-man. For, in reality, man as such is an “intrusion” on the status quo of nature. Only by intrusion can man avoid pestilence and famine. Only by intrusion can man project long-range goals and control his life. Intrusion improves the environment, i.e., man’s surroundings. Man’s life requires productive work, which, as Ayn Rand described it, is a process of “shaping matter to fit one’s purpose, of translating an idea into physical form, of remaking the earth in the image of one’s values” (Atlas Shrugged, p. 937).

They don’t mean it? Well, heed their words, for the consistent environmentalists openly announce their goals. Writes philosopher Paul Taylor:

Given the total, absolute, and final disappearance of Homo Sapiens, not only would the Earth’s community of life continue to exist, but in all probability, its well-being would be enhanced. Our presence, in short, is not needed. And if we were to take the standpoint of that Life Community and give voice to its true interests, the ending of the human epoch on Earth would most likely be greeted with a hearty “Good riddance!” (Respect for Nature: A Theory of Environmental Ethics, p. 115)

In a glowing review of Bill McKibben’s The End of Nature, biologist David Graber writes:

Human happiness, and certainly human fecundity, are not as important as a wild and healthy planet....[The ecosystem has] intrinsic value, more value to me than another human body or a billion of them....Until such time as Homo Sapiens should decide to rejoin nature, some of us can only hope for the right virus to come along. (Los Angeles Times, October 29, 1989, p. 9)

Such is the naked essence of environmentalism: it mourns the death of one whale or tree but actually welcomes the death of billions of people. A more malevolent, man-hating philosophy is unimaginable.

The guiding principle of environmentalism is self-sacrifice: the sacrifice of longer lives, healthier lives, more prosperous lives, more enjoyable lives, i.e., the sacrifice of human lives. But an individual is not born in servitude. He has a moral right to live his own life for his own sake. He has no duty to sacrifice it to the needs of others and certainly not to the “needs” of the non-human.

What a long scroll through the comments. ;-) Perhaps people will be even more conscientious on Earth Day (4/22)?

That leaded football must be crushing your Crush du Jour. ;-)