Fri evening Jim & Barb officially rescheduled Saturday's block party due to the weather forecast.
But Fri evening turned out very well because our Fri night dinner with 'the usual suspects' was held at Walt & Tom's house, rather than a restaurant. We didn't know until the birthday cake was brought out for dessert that it was Tom's birthday. So the 'surprise' was on us instead of Tom. We had a nice group show up and a delicious dinner. When we got home Spouse watched the presidential candidates debate while I watched 'Burnt Money' on DVD. It was good.

Sat morning Spouse & I walked over to the Blue Plate Diner for breakfast. Owners Mark and Jim, who are also our friends, were there and we talked with them until our food arrived. Spouse had a large omelet with hash browns and I had Belgian waffles. Then we ran a few errands.

Shortly before the Straight Eights car show was due to start at 2:00, he headed into Rehoboth under sketchy skies. It hadn't rained all day so far so the car show wasn't cancelled. We had a great time looking at all of the lovely vintage beauties. Most were the same as last year, although a few were missing, and there were a few new additions. Just as we had completed viewing at all the cars and were looking around for Rick & Nick, we started feeling rain drops. Suddenly we saw car owners run from their conversations to put up their convertible tops. It was sort of comical. We weren't far from where we'd parked so we just ran to our car and headed home. The rain lasted less than 5 minutes, and Rick & Nick later told us that everyone dried their cars off with towels and the car show resumed.

As Spouse & I were relaxing and channel surfing Spouse stopped on the ShopNBC channel. Lo and behold, they were featuring a fantastic deal on mattresses! We watched the presentation and recalled to each other the prices we'd seen while mattress shopping 2 weeks prior. That day's special was $999. for any size, with FREE shipping, and free set-up of the new bed and free removal of your old bed, so we knew this deal was not to be beat.

So we bought it. 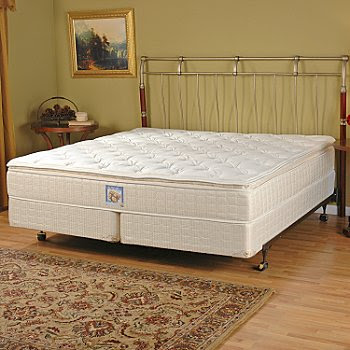 The Serta Bellfield Pillowtop Mattress and Split Foundation should be delivered in about 3 weeks. Its an inner spring mattress with a memory foam pillow top. Its not the TempurPedic mattress I wanted but its less than 1/2 the price. Spouse wasn't as keen on the TempurPedic mattress because he found it difficult to roll over, and also heard from some people that it made them hot at night. So I decided to compromise on the mattress, especially since he compromised on the LCD HD TV.
I also compromised and agreed to 'upgrade' to a king bed. Initially I didn't want to do this because we have 10 sets of queen sheets as well as a queen comforter and bed skirt that I absolutely love. But the king mattress was the same price as the queen, and Spouse really wanted the king, so I agreed. Our queen comforter is oversized so we can probably still use it on the king bed. We have 3 other queens that can use the 10 sets of queen sheets.
Hopefully the king will reduce the motion transfer. On our current bed when Spouse rolls over I bounce all over the place. I tell him I feel as though I'm on a blow-up raft on a stormy ocean.
Sat evening Barb & Jim invited us to join them and a few neighbors for dinner. Jim had made a giant cauldron of Portuguese stew and had grilled up some hamburgers and hot dogs. We ate and hung out for a few hours with some of our neighbors and had a really good time.
Sun morning Spouse & I relaxed with our morning coffee and then got started on the house cleaning. I hate doing it, but I always feel so good once its done. A dirty house makes me feel irritated, and a clean house makes me feel happy and carefree.
Then we drove to Dover with the top down to shop at Value City Department Store. We love this place because you can find great name brand merchandise at close-out prices. We had a gift certificate worth $40. so we bought a set of 600 thread count sheets in king size for $39.99. We also picked up a king mattress cover marked $19.99 that rang up at $4.50 - 75% off! Now we'll be ready when our new bed arrives.
Despite the gloomy, rainy forecast, it only rained a few times and for short periods of time, so our weekend wasn't a wash. It turned out much better than I expected. Now, if only we could find a way to make them last longer.
Crush du Jour: Digo Padovan Nice crush....thats nothing new...But when you get the new bed do we get a post on how it was broken in? I hope so! he he he!!!

Congrats on the bed. :-) And your cruch du jour make sme feel happy and carefree! ;-)

Does the bed come with matching handcuffs?

You have 4 beds at your house? Um, how many of y'all live there?