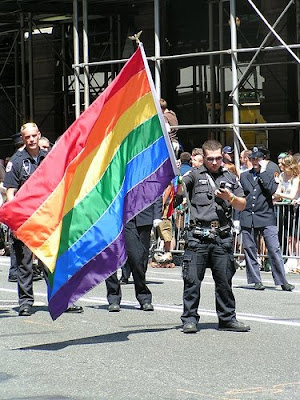 (Rome) Gay police officers throughout Italy who publicly have remained closeted are planning a mass coming out after the Milan force announced it was investigating a cop who had won a gay beauty contest.
Fabrizio Caiazza, 33, won the “Sex Factor” online contest organized by the British gay website Gaydarnation, beating out 46,000 contenders from 162 countries and winning a $20,000 prize.
In his submission, Caiazza posed in his police uniform. A spokesperson for the Milan police said Caiazza did not seek permission to appear in the uniform or to enter the contest. The traffic cop is under investigation for bringing “discredit to the force.” If convicted, he could be sanctioned, fined or fired.
Milan’s deputy mayor, Riccardo De Corato, said Caiazza will likely receive a slap on the wrist.
But Caiazza says the entire investigation is tainted with homophobia and will result in gay officers staying in the closet out of fear.
“Many policemen don’t come out because of the enmity they would face from colleagues and the isolation they would be put in by superiors,” he told Britain’s Observer newspaper.
The investigation has prompted the formation of Italy’s first organization for LGBT cops, called Polis Aperta.
The group will hold its first meeting on Sept. 26 and organizer Nicola Cicchitti says dozens of gay cops will come out publicly at the meeting.
“We’re coming out against creeping discrimination,” Cicchitti told the Observer, adding that the organization already has about 200 members.
Cicchitti said the group will seek official recognition from the government.
The idea won the backing of Vladimir Luxuria, a transgender former member of the Italian parliament.
***************
It really bothers me that gay people in most professions can be 'out' without fear of losing their jobs or being treated unfairly while Americans in the military and Italian police officers can not.
Is it because 'gays can't be trusted with guns'?
I don't think so. In America anyone with no criminal record can legally purchase a gun and not be asked to disclose their sexual orientation. So why can't military service members and police officers be 'out'?
I think it is a matter of trust and respect. Bigots have gotten the crazy idea that gay military service members 'pose a national security risk', so they can not be trusted. Since they can not be trusted, they certainly do not deserve respect and fair treatment.
What about a person being gay would make them any more risky or any less trustworthy? Nothing I can think of. But I imagine that there are lots of things about alcoholics, wife abusers, and drug addicts that make them more risky and less trustworthy, but those things don't seem to matter to the bigots.
Its the same kind of bigotry that allowed the US government to pass DOMA in 1996. Exactly what did marriage need to be protected from? Gays? Hardly, since gays were unable to legally marry in the US in 1996. With the national divorce rate so high, it would appear that marriage needs to be protected from is divorce.
In reality the treatment of Italian police officers and American military service members has nothing to do with posing a 'national security risk', being 'untrustworthy', or 'discrediting the force', but has everything to do with discrimination by bigots in power.
That is why the way we vote is so important. Let's not elect anymore bigots.
Crush du Jour: Pete Sampras 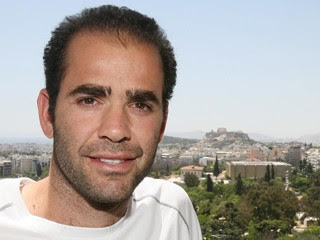 I ahd a friend who- like almost every Isreali- was in the Isreali army. They do allow openly gay people to serve, but not to hold positions with high security clearance or have access to classified information. The idea, he said, was that one's sexuality could be used to blackmail them (many families are not known for their open-mindedness). As a result, he kept his sexuality (and his affair with his married superior officer) a secret.

Pete Sampras has got some amazing eyebrows! Does he have woolly mammoth in his lineage?

OMG now I want to be there when the 200 gay italian cops come out. Swoon!