For the ceremony Spouse & I chose to wear suits we already owned, with new matching green shirts and similar but not matching ties. 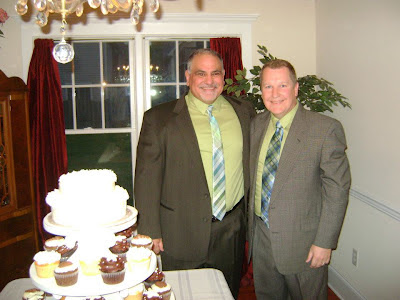 Our friend Chris officiated the ceremony, delivering the following which Spouse & I wrote:

Joe, Mark, Friends… this day has been a long time coming, but I’m sure I speak for us all by saying we’re all very happy to be here with you this evening to celebrate your civil union. 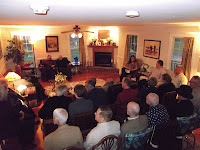 Joe, I know that the idea of having this ceremony seemed a little odd to you at first, since you and Mark have been together for nearly 16 years.  You’ve been through a lot with each other, and having a civil union, which is the legal equivalent to marriage in Delaware, seemed unnecessary to you at first.  But with the passing of some time and the spirit of compromise, you are standing here beside him and before your friends this evening.

In fact, it seems to me that compromise over the passing of time has been a real theme in your relationship. I’d like to spend a few moments and take your friends on a little journey back in time, starting with the night you met.

As I understand it, you two met at a night club in DC.  You were introduced by acquaintances you’d just met that night. When Mark met you he thought “This is the most handsome man I’ve ever seen!”  And when it was time to say goodnight, Joe offered his phone number to Mark and asked him to call the next morning.  Just a few hours later, Mark called, the two of you talked for a while, and set up your first date for just a few hours later.  You two worked fast!

Joe had been casually dating for a while and was looking to meet someone special. Mark had very recently become single and was just looking to date.  The timing didn’t appear to be correct for the two of them, but they decided to see where it might lead.

After talking on the phone the following morning, Joe and Mark met for coffee in the afternoon, which turned into dinner that evening. Two days later they had their 2nd date, and 2 days after that they had their 3rd date.  Three dates in five days!  And then you two hung out together the entire weekend.  It was clear that something new and good had just begun. 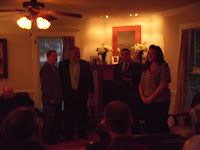 After spending most of your free time together that summer, you two moved into together in October.  Your first home together was a small 50-year old Cap Cod, a foreclosure in need of a lot of TLC.  Joe, you thought “this is the greatest place ever!” while Mark, you had other thoughts.  You had recently lived in a much newer 3-story townhome.  And the day after you moved in together, Joe’s best friend, her girlfriend, and their two dogs moved in with you!!  Clearly the situation required more compromise for both of you.

A year or so later when the friends moved out, Joe wanted a dog of his own.  But Mark is allergic to dogs, so there was another opportunity to find a way to compromise, and Jordan the dog and Pouncer the Wonder Cat joined your happy family.

Then after visiting Rehoboth & Lewes for several years, you two decided you wanted to live here.  Mark was able to bring his job with him and work from home, but Joe had to find a new job, and took one in a somewhat unfamiliar area:  the Children’s Mental Health department.  This was another time when compromise was needed.

Then when Mark was laid off and decided to become a realtor, his working on weekends was yet another opportunity to compromise, since you both were used to spending weekends together.

It seems that time after time, you two have risen to the challenges that Life has thrown your way, and although you may think or feel differently about things at times, you’ve always found a way to compromise and make it work. 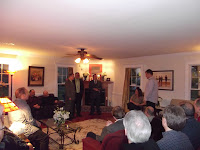 As long as I’ve know you two, you’ve always worn matching gold bands on the wedding ring finger of your left hand.  I understand you placed these rings on each other’s fingers on the first anniversary of the night you met.  But at this time I’d like to ask that you remove your rings and place them in my hand.

Wedding rings are the shape of a circle and are a symbol of eternity, having no beginning and no end, just like Time.  They are an instantly recognizable sign to strangers and friends that the wearers are married.

Joe, will you please place Mark’s ring on his wedding ring finger.

Do you, Joseph choose Mark to be your partner, Spouse, and husband in the eyes of the State of Delaware and these witnesses today, as you did in your heart years ago?

Now Mark, will you place Joe’s ring on his wedding ring finger.

Do you, Mark choose Joseph to be your partner, Spouse, and husband in the eyes of the State of Delaware and these witnesses today, as you did in your heart years ago?

By the authority vested upon me by the State of Delaware and the internet, it is now my honor to pronounce you Partners in Civil Union, or… MARRIED.  You may now kiss your husband. 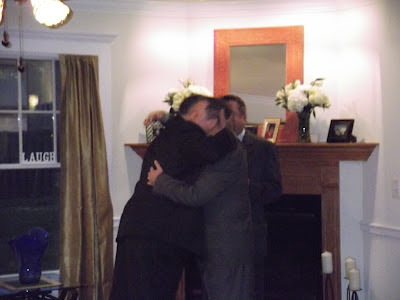 Tonight’s celebration continues with refreshments and drinks.  Food is on the kitchen peninsula and  drinks are on the kitchen table.  Joe & Mark invite you to grab a plate and a drink and sit or stand where ever you like.  And later we’ll have cupcakes!  Enjoy.

Congrats to the two of you. When did DE get marriage equality?

I know here in RI we have the civil unions law but the religious exceptions are onerous.

(sniff) (sniff) so beautiful! and you two are still very much in love; may it last forever!

congratulationst to you both! lovely!

Let me add my belated congratulations and best wishes to you both.

Love the matching ties - congrats to y'all!
-Jackie