TKO - noun, abbreviation for technical knockout
the termination of a bout by the referee when it is the judgment of the attending physician, a boxer's seconds, or the referee that a boxer cannot continue fighting without sustaining severe or disabling injury.
I've been hit with a TKO: I've been notified that I will be laid off at the end of the month.
I'm in shock. Although its been no secret that my company has been unstable for a while now, I just didn't think it would happen to me. I've survived 2 layoffs within the last 2 years so I guess I thought I'd be kept on forever. Or at least until I chose to leave.
I suppose this could be a blessing in disguise. I've not been happy at my job for a while now. Maybe this is the Universe's way to telling me its time to move on. Time to re-evaluate how I want to spend my work hours each day. Time to re-define myself.
But I've got bills to pay!
I'm in shock and I'm scared.
Crush du Jour: Kurt Warner 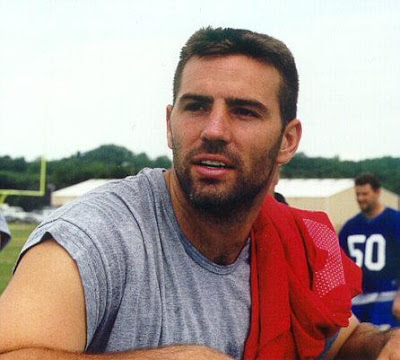 Oh my gosh....horrible, terrible news! I'm so sorry to hear that.

I'm behind in my blog reading...very sorry to hear your news. On the other hand, when a door closes, a window opens. Or some such. Will be sending good thoughts your way.

PM me if you want to talk.

Oh that is HORRIBLE news ... so sorry.

But you might be right ... this could turn into a positive if it leads you to a job you are more happy with.

Oh no! Bad news. Hang in there, you're a resourceful person. You'll figure out what to do.

What horrible and unsettling news! However, I'm hoping for you that this is indeed a blessing in disguise. You've been unhappy with your job for a while now, and have even given some thought to doing something else not too long ago. While I understand that you are scared right now -- anybody would! -- I believe that with your smarts and the support and love of your spouse, you may well emerge better, stronger and happier once the dust settles. Hang in there! Even people like me who only know you from reading your blog are fully behind you.

Terrible news indeed! I'm sure you will find something else soon, a man with your many talents! Think positive! :)

I'm so sorry to learn this as well. It's happening all over. Advertising is a challenge now. Many have been let go where I am in the last few years. Some I miss terribly and some not.
I hope you find something better than what you were doing. In the meantime get Mr. Warner to do your dirty work.