Yesterday I rode home from Richmond listening to my 4-disc box set "12 Nights in Hollywood" by the incomparable Ella Fitzgerald. 4 hours of previously unreleased tracks recorded live in Hollywood nightclubs. It was fabulous!

Prior to Obama's stimulus initiative which saved many states from bankruptcy, this was one of my suggestions: 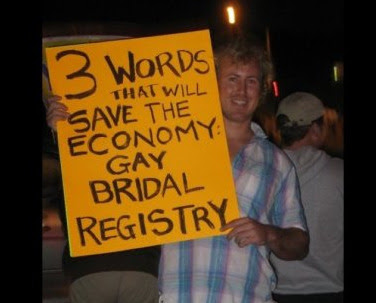 Speaking of gay marriage, here's a heartwarming video of the 1st same-sex marriage to occur in Washington DC this week. Congrats ladies!

This gave me a chuckle: 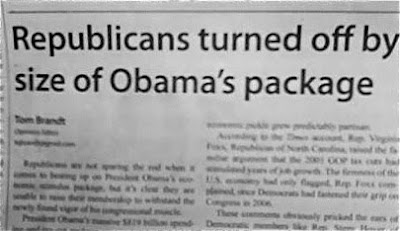 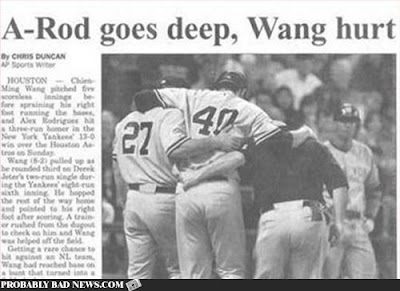 Spouse called me (in Richmond) on Tues to tell me he'd been in a car accident. Fortunately no one was hurt seriously. He just has a bruise on his hip from the seat belt. He turned left and apparently pulled out in front of a vehicle he didn't see, which hit the passenger side of our Honda CRV. This afternoon we got the bad news that our car was totalled. Spouse is currently driving a Dodge Nitro (rental), which we will have to return on Tues when the insurance company cuts us a check for the CRV, minus our deductible, and minus the 5 remaining car payments we had. As much as I love cars I was NOT expecting to purchase 2 of them in the same month!

Bugs & Roger are arriving today! We always have a lot of fun when these good friends of ours come to visit. They'll accompany us to Fri Night Dinner with 'the usual suspects' tonight, and tomorrow night we're going to a screening of "Hollywooed, je t'aime" followed by dinner at Saketumi. Should be a terrific weekend!

Here's wishing all of you a fun and SAFE weekend. 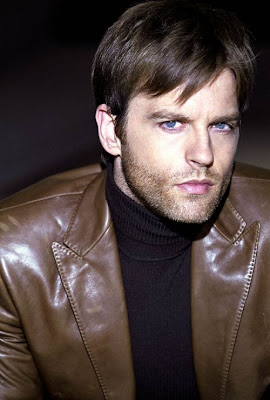 You're right of course. Businesses in the US should be rubbing their hands in anticipation of making a few quid out of 'the gays' in the same way they already do for straight people getting married.

When we had our do a couple of years ago we laughed when the people we went to see to organise it gave us vouchers for the bridal wear shop.

The venues for the lunch & reception was quite happy taking our cash, as were the caterers and everyone else.

As for those photos, they made me chuckle too. :-)

Love the Wang headline. They must have known the double meaning!

glad your husbear is OK - must have been scary. but yeah, 2 cars in one month - NOT fun!

"meh" on the crush - although I DO like the eyes.

Glad Spouse wasn't seriously hurt. We, too, had a car buying spree last year because of car accidents. Not fun.

Sorry the hear about the wreck. Glad your hubby's uninjured.

Poor Trevor St. John looks a little grumpy. Send him to my house. I think I can give him something that will cheer him up.

Add my thankfulness Spouse wasn't seriously injured. Cars are replaceable, the people we love aren't. BEHR HUGS to the both of you.

Very glad your hubby was not seriously hurt.