Retro drag
Recently I ran into one of my "mature" (read: retired) friends who appeared to be attempting to bring back a 'club look' from the 90s: denim shorts, yellow construction worker boots, and white socks. Remember this retro drag? 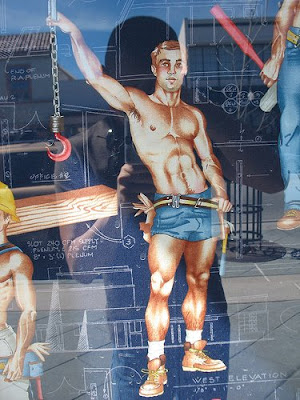 The site of him in this get-up made me involuntarily snicker, so to avoid hurting my friend's feelings, I covered my smiling face with my hand and pretended to cough. It really was amusing!

American Idol
I was rather surprised that Adam didn't win American Idol. I mean, come on! Whether you liked his guyliner and black polished nails or not, you have to admit that he was notably a better singer than Kris. With every genre of music they performed each week, Adam changed his appearance, singing style, and character to match. Kris just seemed to struggle with a few of the musical genres and never changed his appearance. Kris just doesn't have the 'star quality' that Adam has. But the people voted, supposedly. I was the least invested in this season of AI than any other.

Street update
There was more street work on Tues & Wed. Several dump trucks of gravel were delivered, spread, and smoothed. Wed afternoon my neighbor told us he had it on good authority that our street would be paved on Thurs! But Thurs came and no one showed up. Apparently there was some sort of 'paving emergency' and the crew was reassigned. (WTF?) This morning we received word that the paving of our street has been scheduled for next Tues, the 26th. I am keeping all appendages crossed for luck!

Susan Boyle
A friend sent me this which resulted in an involuntary eruption of laughter. One of these is Susan Boyle and the other is Matt Lucas (of Little Britain) imitating Susan Boyle. Can you figure out which is which? 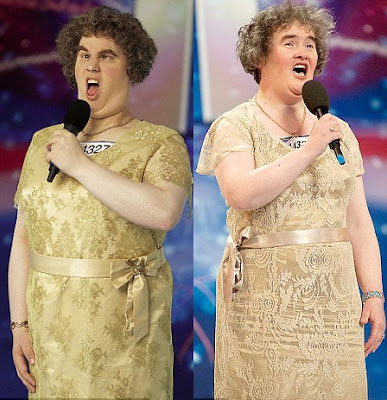 Peekaboo
This week as I glanced out the window at the street reconstruction I saw a construction worker unbuckle his belt, unzip his pants, slip them down an inch or two, reach in and rearrange his 'junk', then pull his pants back up, zip up, and rebuckle his belt, on a public street. Unfortunately he was NOT hot. He looked like a retired member of ZZ Top.

Our neighbor on Oprah
I do not watch TV during the day because I'm working, but last Wed I made an exception. At 4:00 I turned on the Oprah show because I knew my neighbor was going to be on Oprah's "Heroes in Hard Times" episode. My friend and neighbor, Dale Dunning, is known as 'The Soup Lady' because she started Jusst Sooup Ministries 4 years ago, which serves delicious, homemade soup to those in need. From homeless people to those in transition, to those who just don't have anything to feed their families until payday, Dale serves them all. She is truly a beautiful person who works hard yet receives no pay. Her ministry is supported strictly by donations. Check out her site here and consider making a donation which you can feel confident 100% will be spent to help others.
Eruption
A friend sent me this, which also resulted in an eruption of laughter! (Click to enlarge.) 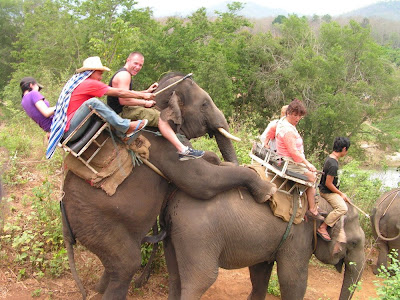 Looks like that elephant may be having an 'eruption' of his own!
Memorial Day weekend
This weekend will be our 1st Memorial Day weekend in years where we will not have company. But we aren't too broken up about it, as this will allow us to attend several local events that we would normally miss if we had company. Fri evening we have dinner with 'the usual suspects' and will celebrate Scott's birthday, Sat evening we're going to a potluck, Sun afternoon we're going to a barbecue, and Sun evening we're going to a cocktail party. These are all things we'd miss if we had company this weekend. We're expecting fairly decent weather so Spouse & I are planning to go to the beach on Sat & Mon.

Hair do
My company has announced early dismissal today in honor of the impending holiday weekend, so I scheduled myself a hair cut appointment at 4:00. Gotta get my hair did before our trip to NYC next week!

Here's wishing everyone a FUN and SAFE Memorial Day weekend! 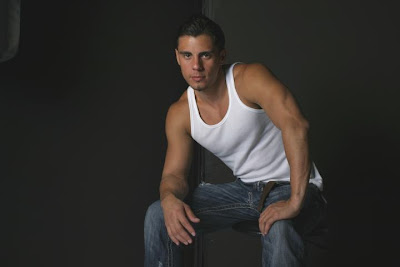 I'm afraid that my American Idol days are over. I was less than enamoured with the season.

I'm with you about Adam. Much better performer than Kris.

And the ZZ Top junk-man? Scary!

Thanks for the LOL's...seriously, that Susan Boyle imitation is spot on! I love Matt Lucas!

That Retro Drag thing can be pulled off if you're young and buff (God almighty, that was me 20 years ago!)

As to AI, I think it was subtle homophobia to be honest. Adam Lambert was infinitely more talented than the winner.

BTB the 26th is also when the CA Supreme Court is going to announce it's findings on Prop 8.

Have absolutely no plans for the weekend. I like it that way.

First have a great weekend. It sounds busy.
Adam was certainly the best in my book but a bit too polished for AI. They should have to sing the same songs but that would make for a more boring show/season I'm sure.
I love to see men arrange their junk.

To bad it wasn't a cute guy in the peekaboo department. I luck it would have been a guy like that too. Everytime I get a workmen in to repair something he is always fat of old. The Susan Doyle pic is funny as hell! And the elephant? I would have expected to see that on Lady Bunny's blog!LOL. Have a wonderful weekend!

What a post- retro boy drag, guyliner, AND elephants fucking!!! I had to laugh at the retro drag look- I had it perfected in the 90's! WHo the hell did we think we were- the Village People? At least we weren't running around in Indian costumes!

How funny- my word verification is croinge- like "the tought of running around in taht looks now makes me croinge!"

Both those made me erupt with laughter too. Hope you have a swell holiday.

Funny stuff! Glad I discovered your blog. I added you to my blogroll. Wanna swap?