Sat morning we were up by 7:45 am and out the door by 8:15 am. The town of Milton was having its semi-annual community yard sale, and although we weren't looking for anything in particular, we thought it would be fun to browse the variety of stuff, ranging from trash to treasure. We made sure to stop at our friends' houses to chat.

I spent $2. for a CD from the Lounge series called "Christmas Cocktails II". Spouse spent $2. for 6 melamine dinner plates (good for outdoor eating) with a really cute and colorful retro pattern on them. I spent $2. on a wrought iron wall hanging/candle holder with the glass sleeve intact, and 50 cents for a throw pillow. It was fun!

Back at home Spouse did a little vacuuming while I tidied up the kitchen before Rick & Nick came over and the 4 of us walked to the historic society for the Lewes British Auto show. We browsed about 50 or 60 Jaguars, Austin Healeys, Triumphs, Lotus, Minis (not the new ones made by BMW), and MGs. It was fun, but I don't get very excited about British cars.

Where are the tail fins? 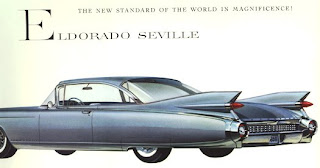 We went mainly for Rick & Nick.

After walking back home, the 4 of us drove to the state fairgrounds in Harrington for a car collector's auction. I've been to plenty of car shows, but this was my 1st time at a car auction. And it showed.

We arrived a few minutes after the auction had begun, so we only had a few minutes to browse the cars waiting in the pavilion before taking a seat on the bleachers where the auction was taking place. There were only a handful of people there (I'm talking less than 20) and I thought that meant that they were really going to get some good deals, since there were so few people to bid against them.
One at a time the cars were driven to the auction block, described, the auctioneer would start the bidding and no one would bid. The auctioneer would drop the opening bid by a thousand or two, and still no one would bid. The 4 of us sat in amazement as an ocean-blue 1968 Dodge Polara with a white vinyl top failed to get a bid at $2000. The same thing happened with several other more desirable cars. 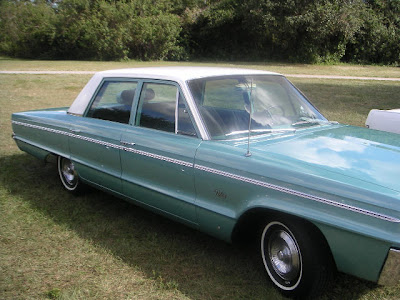 I'm sure I uttered an audible gasp when I heard the bid go down to $15,000 for this 1963 Cadillac Sedan de Ville with only 4,000 miles! It was the car belonging to the proverbial little old lady who only drove the car to church on Sundays. It was completely original and looked like it had just been driven off the showroom floor... in 1963! When no one bid on it at $15,000 the auctioneer said he'd move onto the next car and this beauty would live to see another auction.

When the auction ended we went back to the pavilion where the cars had been parked again, and looked at the pretty Polara again. See, Spouse & I have always joked about us ending up with a late 60s Dodge Polara instead of an early 60s Cadillac like I want. We began to wonder if Kismet was putting our vintage car in our hands at a bargain price. Although we had not come with the idea of bidding on or buying a car, we thought $2,000 for that Polara was really hard to walk away from.
After inspecting the Polara for probably close to 30 minutes, Rick encouraged us to check with the auction management about getting the owner's contact info, in case we decided we wanted to buy the Polara after all. As I suspected, the manager said they did not give out owner information, but he did tell us the owner had a reserve of $4,400.
"Oh, I thought I heard the auctioneer say '$2,000.'" I said to the manager.
"He did, but that is to get people bidding and get the price up to, or hopefully over, the reserve price." he replied.
Then it made sense. Its just like bidding on eBay. You may bid $5.00 for an item, but if the seller has set a reserve of $10.00 and no bids reach or exceed that $10.00 reserve, the auction closes and the item is not sold.
In a way I was relieved. I hadn't planned to buy a car that day, didn't have a money order or cashier's check, hadn't registered to participate in the auction, and didn't want to pay the extra fee for using a credit card. On top of all that, there were red flags going up right and left in my head. Everything I've ever learned has taught me not to purchase on impulse, especially things that are expensive or can't be returned - like a car!
So when we learned the pretty Polara couldn't be had for $2,000. after all, I breathed a secret sigh of relief. I consoled myself and Spouse by predicting that when we're ready to purchase a vintage car we will have done our homework and will be prepared. Oh, and we'll actually have the money to pay for it.
On the way home from the auction we stopped and had a late lunch at a diner, which seemed all too appropriate after having enjoyed looking at vintage cars.
When we returned home we said goodbye to Rick & Nick, got cleaned up a little, and said hello to our friends Kerry & Hugh. They were in town for a community maintenance day at their rental condo in Ocean City, and we'd made plans to have a visit and dinner together. We walked to Striper Bites and had a tasty dinner, which was preceded by a grape martini for me. We had a lovely time with them, as we always do, and they left shortly after 10:00.
Crush du Jour: John Stamos 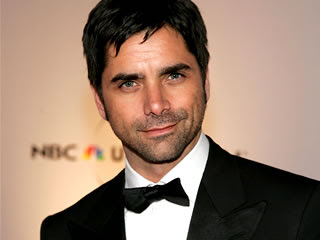 Yeah, two grand would have been sweet. These remind me of my first car, er boat, a 68 Chrysler Newport.

I was reading this and was so sure you were going to he the Polara! Alas, you should do the research first though. $2k would have been a steal.

I bought a vehicle at an auction on impulse. The whole affair was interesting. It wasn't a classic vintage Polara or anything like it. No, I bought an old Ford Econoline E150 work/panel van, one that had been used as a service truck for a school district. It was powder blue. Literally "powder" blue, in that the paint had deteriorated so much that it was almost the consistency of powder. I liked that van. I named her Babe the Big Blue Box. She had good air conditioning in the front. We used that old clunker for quite a few years. I even threw a rod in her engine one night on my way home from the grocery store. Made a damned funny noise. We paid to have her fixed, too. Finally sold her to an old man who wanted to use her in his painting business.
Thanks for the memories!
Oh, and Mr. Stamos is HAWT!!

I'd be apprehensive buying on impulse also. But it all sounds like great fun. I seldom hear of auto shows here except the annual new/concept car show.