Spouse & I packed up the ML 350 and were on the road by 8:15am on Thurs.  We made 1 brief stop in upper DE to get coffee, another brief stop in NJ for lunch, and another brief stop in NY for gas.  We encountered no traffic delays (even at the border) and really enjoyed seeing the beautiful fall foliage.  I didn't take any photos of the foliage since I was driving.  The GPS worked great, and we talked a lot of the way but also listened to some music.

We arrived at Tornwordo & Serge's house in Montreal shortly after 7pm, so it took us a total of 10 hours.  We visited with them and Georgie, and enjoyed a lovely snack with sparkling wine to toast our arrival which was very thoughtful of them. 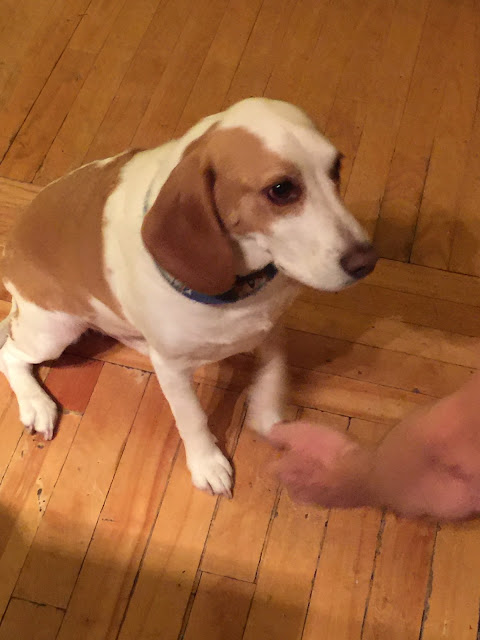 The 4 of us made our way across town, brought our luggage inside our apartment, and then had delicious pizza at La Piazetta, then stopped in for a drink at Campus.


Tornwordo & Serge helped us get our bearings by providing us with a map and several nice tips.  Montreal is in the province of Quebec which is French-speaking.  Many people in Montreal can speak some English which is good since my French is quite limited.  Even when I am able to string together a coherent sentence in French, when the person replies in French I am over my head.

A neat thing about downtown Montreal is that the City has a lot of free wifi.  Most of the time I was able to find free wifi connections which enabled me to use my iPhone to post photos to Facebook.

Tornwordo & Serge took our car back to their house where it could be parked on the street for free and we settled into our little apartment.  It was a studio in a building I would estimate to have been built in the late 60s or early 70s.  We found it on AirBnB.com and selected it for its ultra convenient location and the fact that it had a balcony. 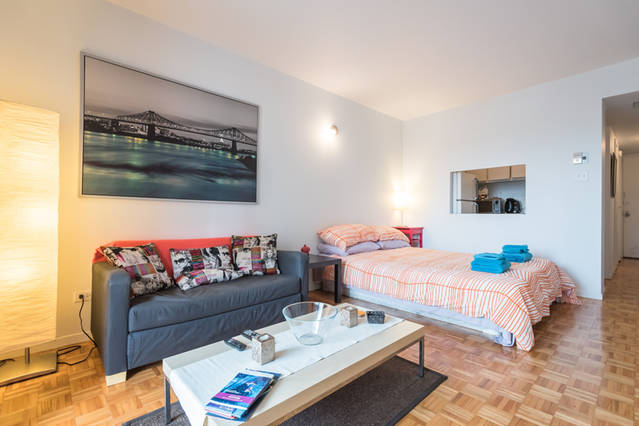 The studio was located less than a block from a metro station and just 1 block to Ste Catherine St which is the main street of Le Village (the gay village) where many of the gay bars, restaurants, and clubs are located.  The studio was on the 6th floor of the building and the balcony offered a great view of Mont Royal, the tallest spot in the city. 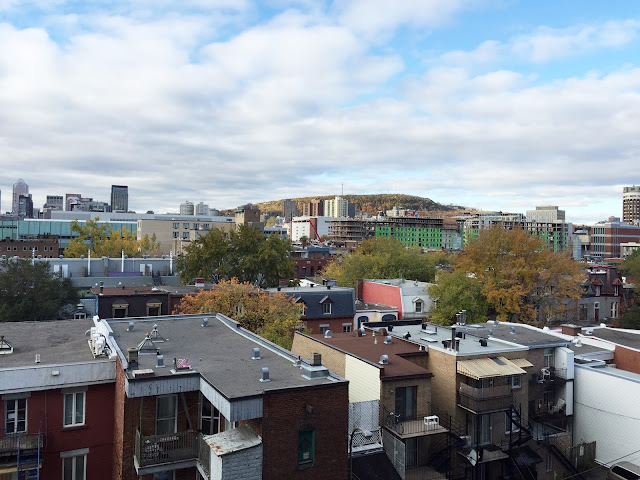 Fri morning Spouse & I headed over to Ste Catherine St to have breakfast at Chez Cora.  Spouse had a traditional breakfast while I had a lovely French crepe filled with Nutella, apples, strawberries, kiwi, pineapple, grapes, and melon.  C'est magnifique! 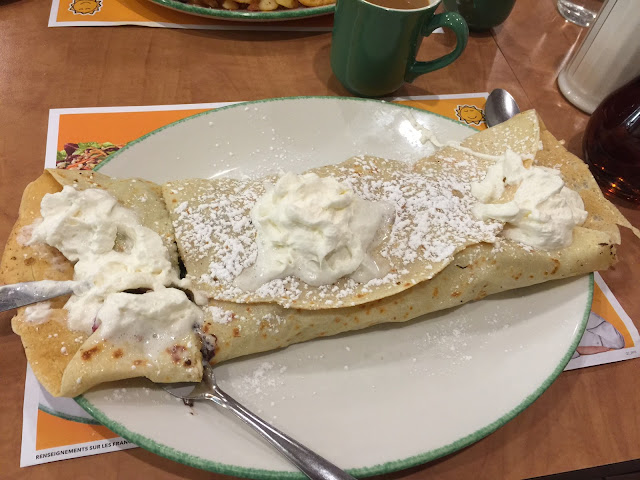 Then we got on the Hop On/Hop Off bus for a narrated tour of the city.  One of the stops was the Oratory of St Joseph on Mont Royal. 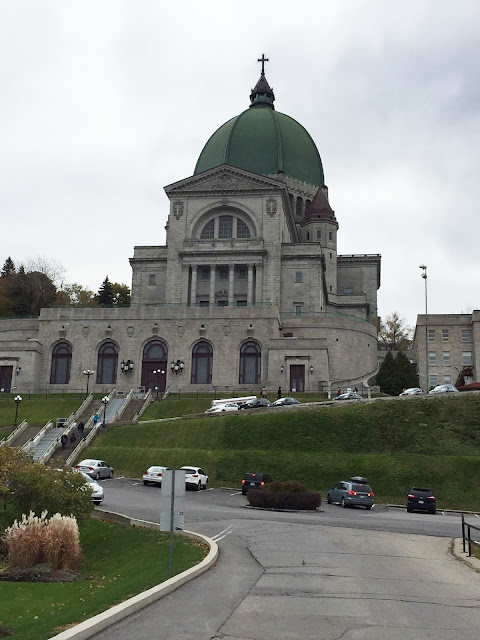 I also liked the building across the street from it which is the College du Notre-Dame de Montreal. 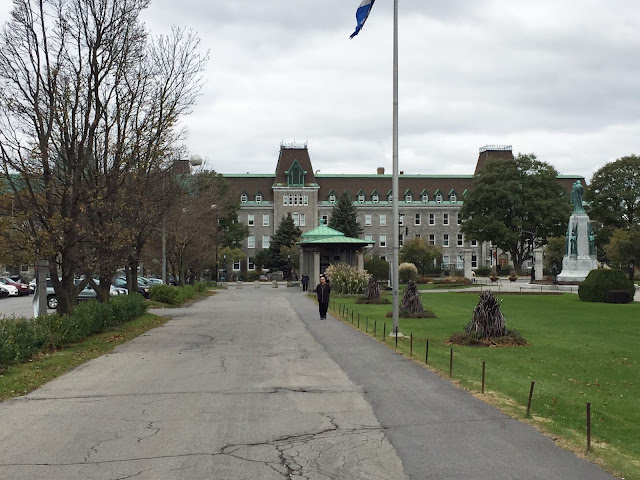 The bus also stopped for photos from a hillside vantage point which offered great views of the city.

After the bus tour we continued exploring on foot, stopping into stores and peeking at menus of restaurants.  In the late afternoon we returned to the apartment to rest up a little and change clothes, then we met Serge for happy hour at Sky Complex, then a 2nd drink at Lounge L'Un et L'Autre where Tornwordo met up with us.

Next the 4 of us went to dinner Le Saloon, a chic bistro with very cool black and white wallpaper.

OMB, the city has not changed too much since my last trip in 1991. serge and torn look youthful as always; must be the clean living up there!

GEORGIE! such a sweet boy!

and I want a taste of that breakfast crepe!

So far, what a wonderful trip!!!! I remember Oratory of St Joseph on Mont Royal very well. I have several pictures with a mother and half brother on the steps leading up. And what handsome host you had. They almost look like brothers!!!! And that crepe!!!! SINFUL!

Glad you and spouse had a great time in my hometown. It's also good to have wonderful guides to point out where the great places are. :)