Our friends Liz & Rob and their children Jonathan and Rachel arrived on Fri.  Rob was a roommate of mine nearly 30 years ago, and Liz was a family friend.

They wanted to go to the boardwalk and have pizza at Grottos so we did.  Rob & I are usually the 'minorities' because we like all kinds of 'garbage' on our pizza, so since we were together and ordered multiple pizzas, we actually got what we like on our pizza for a change.  Spouse, Liz & the kids wanted just pepperoni.  After we ate, we walked along the boardwalk for a little while, but it began to

sprinkle.  Rather than just taking temporary cover, we decided to head back to the car before the rain really got started.  On our way back to the house we talked about the new Sweet Frog frozen yogurt bar that opened here.  I'd never heard of it but Liz raved about it, so we stopped in.  OMG, there are about a dozen flavors of frozen yogart, and you can select as much or as little of as many or as few flavors as you want.  But that's not all... next you add as much or as little as you want of the 50 or so toppings onto your frozen yogart.  Its like a giant sundae bar!!

Sat morning after coffee we walked over to the farmers market, and then to the canalside park.  On our way to the park we ran into former clients of mine and had a short but lovely conversation with them.  Liz was in the mood for Mexican for lunch so we went to La Tonalteca.  Yum!  From there Spouse & I went back home and relaxed while Rob & Liz and the kids went to the beach. Once they returned and showered, we headed over to Saketumi for Joe P's birthday dinner.  Since Joe P had never met our guests before, we decided to play a little prank on Joe P.  We sent Rachel (age 12) over to Joe P with a birthday balloon.  She handed it to him and said "Hey Mister... happy birthday" and then walked 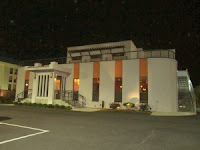 away.  A minute later Jonathan did the exact same thing.  Then it was Liz's turn, andfinally Rob's turn.  Meanwhile, Spouse & I could hear Joe P and the other birthday dinner guests laughing as this parade of strangers brought him birthday balloons.  Then all 6 of us joined the dinner and Joe realized the strangers with the balloons were our friends.  It was a fun prank!  We had a terrific dinner at Saketumi (as usual) and Joe P really had a nice time.  Again, on the way home we had to stop at Sweet Frog!

Sun morning Spouse made a full breakfast of eggs, bacon, sausage, blueberry pancakes, and English muffins.  Shortly afterward, Rob & Liz and the kids headed home and Spouse & I hung out at home.  Later that evening we had dinner with Joe P and Steven & Thad at Big Sissies.

you and spouse always have fun weekends with good food and good friends!

we have menchie's here, similar to sweet frog! OMB to die for! esp. the fresh fruit toppings!