Tonight I had the honor (?) of seeing the lengendary Queen of the Tupperwear Party, Dixie Longate.

Dixie is a drag queen whose character is a southern, straight-but-not-narrow mother who sells Tupperwear at Tupperwear parties.  And Dixie really does sell Tupperwear to many of the attendees of her shows. 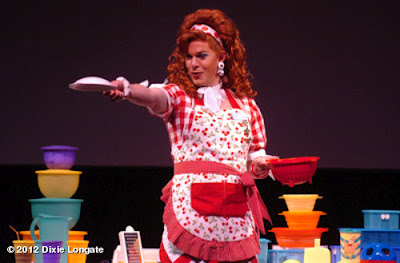 Dixie performed at the Blue Moon and when I entered the room I saw Tupperwear brochures on all the seats!  Dixie's routine has little to do with Tupperwear until the end.  Mostly she talks about current events from the eyes of a partially-informed southern white lady with a no-nonsense point of view.  She did manage to get 2 couples from the audience to participate in a competition to see who could rim (seal) a stack of bowls the quickest.  It was entertaining and I would recommend going to see Dixie if she comes to your neck of the woods. 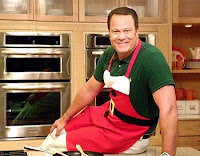 Also there for the show and seated 2 seats away from me was none other than QVC personality David Venable.  It was rather dark when I sat down so I didn't know it was him at first, until I heard his voice.  With all of Spouse's hours of watching the various home shopping channels it only took 1.2 seconds for me to know who it was.  In a very non-stalker kind of way I told him that I recognized his voice and that my partner enjoyed watching and shopping.  He asked that I thank Spouse for him.