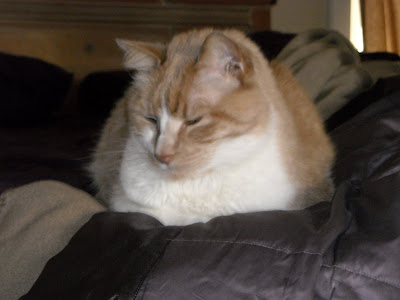 When Spouse got home from work yesterday we discussed the reality of Pouncer's deteriorating condition and although he did not seem to be in pain, he was obviously distressed by the difficulty he had with breathing. He didn't eat anything yesterday and barely drank any water. He slept the entire day. Spouse & I came to the heart wrenching but mutual decision to end the distress. I was weepy on and off the rest of the night and second-guessed the decision many times.

At 9am today I brought Pouncer to the vet. I'd cried in the car but pulled myself together enough to enter the office. After signing a few forms, they explained that they would give Pouncer a sedative first, then the final shot after he was asleep. I could be present for as much or as little as I wanted.

So they gave him the sedative and left us in private. I cried as I thought about what I was doing, even though I knew it was for the best. I held him in my arms and scratched the top of his head lightly, sitting in a chair. Pouncer isn't fond of being held so he tried to get down from my lap a few times, but within just a minute or two he got drowsy and settled down. I continued scratching his head and holding him close to me. He was asleep. I could feel his breathing with my right hand under his belly and his head resting in the crook of my elbow. Suddenly a sense of peace and calm came over me. I continued to cry but not out of profound sadness, but rather, relief that he was resting comfortably.

A few minutes later the doctor and tech came in and asked if I was ready. I was afraid to speak for fear I'd burst into sobs, so I just shook my head yes. I stood up and gently laid Pouncer on the soft towel on the exam table. I blew my nose and wiped my eyes and told the doctor I didn't want to stay for the rest. I wanted to remember holding him in my arms as he slept. They were very nice and waited for me to gather myself. The doctor assured me that Pouncer was asleep and was not aware of what was going on. "But I am" I said. The doctor assured me they had done everything they could and I managed to say thank you as I left the room.

We got Pouncer in June of 1998 from an animal shelter when he was only a few weeks old. He had a wonderful life with us for more than 12 years. I'll miss the way he sat and waited for me to finish showering so he could lick the water off the glass shower door. I'll miss the way he used to sit on my chest with his front paws on my collar bone at night while we watched TV. I'll miss the way he'd come running into the kitchen anytime we opened a can, thinking it was tuna.
Goodbye, dear friend. I love you. 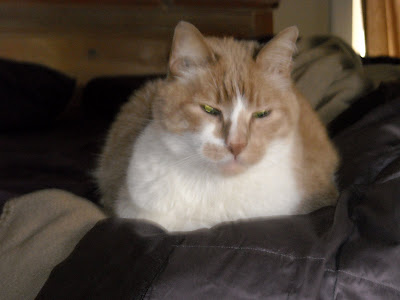 Email ThisBlogThis!Share to TwitterShare to FacebookShare to Pinterest
Labels: Pouncer

I am sorry for your loss. I stand by the belief that it takes far more love and compassion to let our pets go than to selfishly keep them and let them suffer. You showed great love and compassion for Pouncer today, so I'll thank you on his behalf for loving him enough to let him go. My thoughts are with you today. *hug*

This post made me cry at my desk here at work. I'm so sorry for your loss.

Oh Mark, I am so sorry.
I know what that's like, wondering if you're doing the right thing for you beloved pet.
I shed my own tears, reading this post, because it took me back to the many pets we've lost.
My heart goes out to you and Spouse.

I'm so sorry for your loss. My thoughts go out to you and spouse.

Oh Mark I'm terribly sorry. It's one of the hardest things in life to do, I know.

I'm so sorry to hear about Pouncer. Reading your post made me cry as well because I've recently been there myself. We lost our 8-year-old cat, Shubert, in July, and it was one of the most heartbreaking days of my life. My thoughts are with you, Mark.

I am so very sorry for you loss. I am sending you my love, thoughts & deepest sympathy.

I am SO sorry for you guys! I know how hard that is to do. I'm sure you made the right decision. Hope this doesn't derail your cruise completely. Feel better soon.

It is always difficult when our friends cross over the Rainbow Bridge. Be assured that Pouncer will be greeted by Tabitha and Leah who crossed over years ago and will be waiting for him with a ball of string, a fuzzy mouse, and a baggie of catnip. You and Spouse gave him everything a cat can ask for: a home to rule, servants at his beck and call, and lots and lots of love.
HUGS to you and Spouse.

This was almost hard to read, I think you articulated well, the love you had for this creature.

When I was 13, we had a dog called socks, who was all black except for brown feet, I loved him dearly.

In fights with my brothers, he would defend me, just like he defended our home. However as he grew older, he became vicious.
We had no choice but to have destroyed.

I agreed with the decision at first but when the Vets came to pick him up he wasn't vicious to him, he just wanted to stay with me. When they the tie around his neck he was jumping so high into the air the Vet struggled to hold him. Each time he escaped, he ran back to me. It was so upsetting, he knew what was happening.

I think it was pouncers time to go. At least you have all the happy memories.

Sorry to hear Pouncer lives on only as a memory, that soon will be a happy one! We lost Chadwick almost a year ago to the day after 16 years. It was terribly sad...

Sometimes I still think she and Cecilia (who died about 4 months later) are still around.

awwwwwwwwwwwwwwwww, pouncer...my steven and meredith send their purrs to you and spouse. I will tell sydney and kelly (my dearly departed kitty kids) to be on the lookout for pouncer. and my hugs to you at this sad time in your life.

My Friend Mark! I am so sorry for such a monumentally difficult day for you both. And for Pouncer. I cannot imagine how tough of a time you must be going through. All of my love to you both....for your rest and comfort.

RIP Pouncer. It's so hard, even when you know you are doing the right thing! I admire your strength.

Please accept my heart-felt condolences as well. Your tribute was moving. Pouncer obviously had a happy home and happy dads.

My condolences. It's always tough to end the life of a family pet.

They're more like family members than pets these days.

Jamie and I are both really sad to hear about Pouncer. He was a great cat and was always so sweet when we were visiting. You made the right decision though.

So very sorry to read this news. My heart goes out to you and Joe.

you gave the little character a good home for a long time
well done for that!!!!

So sorry for your loss. I know that had to be tough.

Pouncer will always live on in your heart. Hugs to you and spouse.

I'm so very very sorry for your loss. I know exactly what you are going through.

And I'm absolutely sobbing here-- I could barely read your post.