We returned from our cruise (plus an extra day in Ft Lauderdale) last night, and after unloading our suitcases, hat boxes and steamer trunks, we met up with Steven & Thad and one of the Bobs for dinner at La Tonalteca. It seemed Mexican food was the only cuisine we didn't have during our vacation.
Jordan was happy to see us when we opened the door, and barked and wagged her tail furiously. This of course made me sad that Pouncer was not behind her, meowing and trying to lick me. Although initially I thought the timing was horrible, saying goodbye to Pouncer the same day we left on our much anticipated cruise vacation, it was actually great because the excitement of the trip kept me from dwelling on my sadness.
I'll share more details of the cruise later, but in summary I'll say that we had a great time. Thurs evening we stopped for dinner on our way to Baltimore where we stayed overnight at a hotel near the airport. We arranged to leave our cars at the hotel for a modest fee and rode a free shuttle to the airport for our early morning flight on Fri. Just over 2 hours later we arrived in Ft Lauderdale and checked into our hotel which was right on the beach. The weather was sunny but uncharacterically cool and windy. Later that afternoon we attended a pool party hosted by the Chumley Bear Cruise group, then had dinner at Tropics in the gay-famous Wilton Manors area of Ft Lauderdale. I saw Terry & Jerry there, whom I knew from back at home. I didn't realize they spent the winter there. Then went to a Bon Voyage party at The Manor nightclub.
Sat afternoon we boarded the ship, the Crown Princess, which was completely overwhelming due to its size. 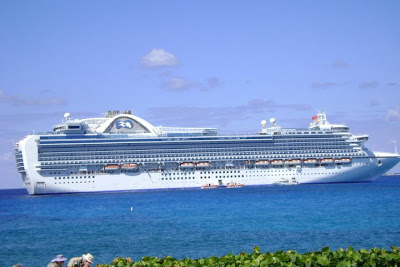 Imagine a 19-story hotel that occupies an entire city block, floating in the harbor! The ship was spotlessly clean and absolutely beautiful throughout. Our group of nearly 500 took over the smallest pool (1 of 4) at the back of the ship for the whole week, and in addition to all of the ship's activities, we had several activities throughout the week reserved just for us. We had a few rounds of 'The Gay Dating Game' and 'The Newlywed Game', a private screening of the new film 'BearCity', a dance, and a pool party.
One activity whose popularity with our group surprised me was the afternoon tea. 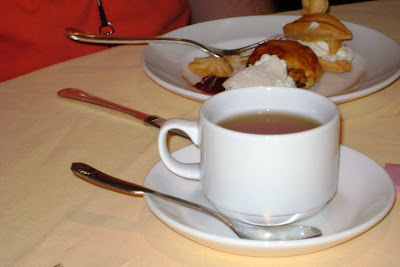 At 3:30 each day we were treated to an afternoon English tea, finger sandwiches, scones, and assorted pastries by uniformed wait staff in white gloves. It was oh so very proper and fun.
The food on this cruise was delicious and plentiful. In addition to the amazing dinners in the dining room each night, there were several 24-hour buffets, a pizza and soft-serve ice cream station, and a hamburger, hot dog, bratwurst, and french fries station. Our typical routine consisted of a full breakfast about 8:00, lunch at 12:00, a slice of pizza (snack) around 2:00, afternoon tea at 3:30, and dinner at 8:15. I know - ridiculous, right?!?!
We opted not to purchase any of the excursions, but instead did our own 'exploring' at the ports of call. Our 1st stop was Grand Cayman Island where we walked and shopped our way through the village at George Town. Our 2nd stop was Roatan Honduras where we took a ski lift ride and spent the day at the beach. Our 3rd stop was Cozumel Mexico where we paid a native taxi driver $40. to drive 4 of us around the city for an hour, showing us the highlights and lowlights. Our 4th and final stop was Princess Cay, a private island owned by Princess Cruise Lines in the Bahamas. We spent the day on the beach and enjoyed a buffet lunch on the island.
The one area that didn't seem on the same par with everything else was the entertainment. There was a 'show' the 1st night that basically consisted of the cruise director welcoming everyone onboard with a canned, semi-comical schtick followed by a 15 minute routine by a comedian who'd been on the Tonight Show. Yawn. Later in the week was the 'Motor City' show which paid tribute to music that originated out of Detroit. We found it ironic that there was only 1 African American in the entire cast. The 3rd show was a crew talent show which was probably my favorite of the 3. Waiters, engineers, and cabin crew members sang, played instruments and danced.
The weather was great the entire time. We had a brief shower once or twice but nothing that altered our plans. We went to the beach or hung out by the pool everyday. In anticipation of possible rough seas I wore a small anti-seasickness patch behind my ear. It hardly seemed necessary since the ship was so smooth... until the last night. The captain announced we'd be entering choppy water between 6-10pm and sure enough, the enormous ship rocked and bounced enough to send me and some others to bed. They closed the outdoor portion of the Promenade deck to make sure no one fell overboard. But once through the rough area the ship stabilized and everything continued as before.
The group of nearly 500 bear men with whom we spent this cruise were great! We found everyone to be fun, friendly and unassuming. I didn't see any attitudes or cattiness. And although I'm not a bear myself, no one acted like I didn't belong. But that could have been because Spouse was such a star among the bears! We would definitely go on this cruise again. We met a great new friend from TX named Eddy, as well as a couple who live very close to where we used to live in VA. In fact, upon becoming Facebook friends with them we discovered several mutual friends. 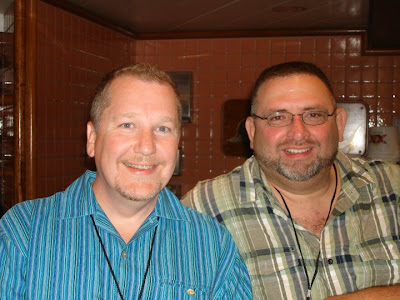 And our enjoyment was certainly due in part to the great friends who went with us from DE, Steven & Thad, The Bobs, and Chris & Jason. We shared a LOT of fun and laughs! Look for details of the fun and laughs tomorrow.
We disembarked on Sat and returned to the beachfront hotel in Ft Lauderdale where we relaxed in lounge chairs and swam in the pool. Later we walked to a French restaurant and had a lovely dinner on their patio. Sun we flew home and faced the reality of life off of the cruise ship, where we'd have to cook and clean up after ourselves. We all agreed that reality SUCKS!
Posted by Mark in DE at Monday, November 15, 2010

Email ThisBlogThis!Share to TwitterShare to FacebookShare to Pinterest
Labels: Chris and Jason, food, Steve and Thad, the Bobs, vacation

happy you had a wonderful time...and spouse REALLY looks great! the weight loss agrees with him!

but where are all the dirrrrrrty details, hmmmm?

FYI - the guy beside me in the photo is my friend Steven.

lookslovely!!!
but afternoon tea in the UK is ALWAYS with milk!!!

Oh it's so time for us to go again. Love cruising! And you totally missed out on Stingray City. Best twenty-five dollar excursion in the caribbean. (bought on shore of course)

I just found out that my friend Glenn and his BF Wendell were on the same cruise! Coinky-dink!