As everyone knows, yesterday was 'Super Tuesday'. My state of Delaware was 1 of 24 states that held primaries yesterday, and Spouse & I were excited to vote at the middle school just around the corner. 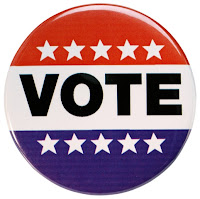 It was quite a different experience from when we lived in Virginia and voted in their primary. There I stood in line for 45 minutes to cast my vote, and it wasn't even a presidential primary. Yesterday Spouse & I waited about 15 seconds for the one and only other voter in front of us to show their ID. We did the same, voted, and were out within 2 minutes max. Man, I love this little hamlet!

Yesterday was also 'Fat Tuesday', the last day that Lent observers can eat whatever they want, and also the official start to Mardi Gras. Spouse asked me "What are you doing for Lent?" to which I replied with a smile "I use a Lent brush. It works great." He gave me a look that tried to be disapproving, but I knew he appreciated the joke. 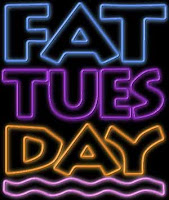 Having not been raised Catholic like him, I've never observed Lent. I really don't believe in it. I believe that God wants people to be happy, so therefore He is not impressed by temporary food or fun deprivations. Whatever.

Yesterday was also our friend Nick's birthday, so to celebrate Super Tuesday, Fat Tuesday, and Nick's birthday we decided to have dinner at the Purple Parrot. Spouse & I had some delicious gumbo, and all 4 of us ordered 1/2 price quesadillas. Margaritas were also on special so I had one. And can you believe it - they served my margarita in a tumbler! I was going to make a joke about it to our obviously gay waiter, but found he was too self-absorbed to notice. Not self-absorbed in a bad way; he gave us great service and was very pleasant. He was more self-absorbed in the Jack from 'Will & Grace' kind of way. The 4 of us had a good time.

Yesterday's temperature was very mild. It got up to 62 degrees, which is pretty unusual for Feb. But today it is just crazy-warm. Its not even noon yet and the current temperature is 70 degrees - on Feb 6th!!! WTF? Its as if I woke up in June. I think I'll go for a ride with the top down on my car at lunch time. 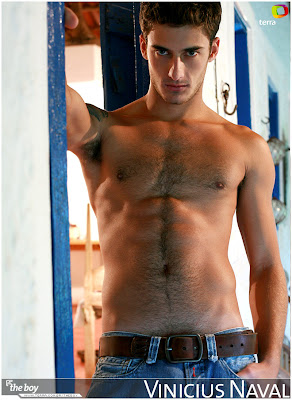 I have had margharitas served either way, in a special margharita glass and in a tumbler. I believe it's ok to serve them in a tumbler if they are served on-the-rocks, but if they are frozen they are supposed to be in the special glass. I always order then on-the-rocks, and on of the reasons is I don't like drinking out of that shallow glass. Just my thoughts.