We had a really fun weekend in Atlantic City!

It was windy on Fri so the ferry across the Delaware Bay to to Cape May was "interesting".  I didn't get sick but the ferry was rocking and rolling for sure.  Once in Cape May we drove the 40 minutes (plus/minus) to Atlantic City and checked into the historic Claridge hotel.  Then we walked over to the boardwalk where it was windy and quite cold - only in the 30s.  We had some boardwalk food, checked out a few cheesy stores, then headed back to the warmth of the hotel for a little rest.  Spouse & I had not been to Atlantic City before so it was new to us.  We were surprised at the vacant land so close to the boardwalk.  Apparently there had been hotels and casinos there when Atlantic City was the only place to gamble, but once neighboring states began to allow gambling Atlantic City had more hotels and casinos than it could support.  Some were torn down to save on tax revenue or because they were intended to be replaced with new buildings but never were.

A while later we had a snack in one of the hotel's restaurants, then headed to the Boardwall Hall for the show.  Here's Spouse & me waiting for the concert to begin. 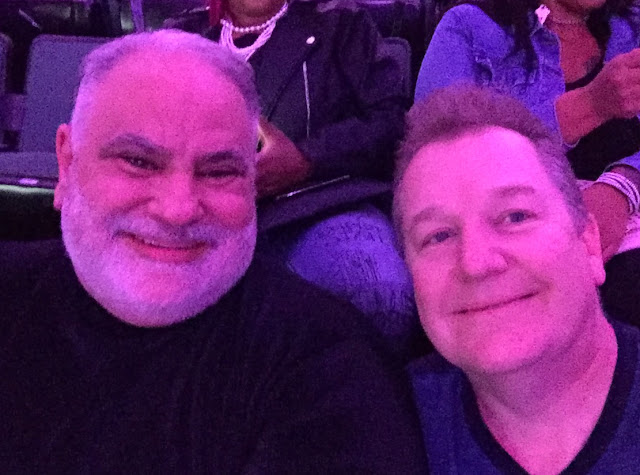 Janet was amazing!!  Despite having a baby less than a year ago, she looked phenomenal.  I was thrilled that she sounded so good despite all the intricate choreography she's known for.  The performed all of her hits, but not the full songs.  Several of them were edited down and strung together in a medley.
But it was a really great show and we had a great time there.

Afterward we had a snack at AC Snack Shack where we got delicious tacos and burritos.  Then we stopped at our rooms to drop off our coats before heading upstairs to the rooftop bar called Vue.  While it was too cold to stay outside and enjoy the city views, we had a great time inside.  Our friend  Mortimer is a bartender there so he made us some fabulous cocktails (Cosmos for me, of course), and there was a fantastic DJ who had us dancing on our bar stools.

We left Vue about 1:45am and plopped into bed about 2am.  I fell asleep immediately, but was awakened at 7:45am when a client texted me.  Argh!!!  Although I didn't respond to the text, it unfortunately woke me enough that I couldn't get back to sleep, so after laying in bed awake for awhile I just got up and quietly looked at Facebook while Spouse slept.

Later we checked out of the Claridge, drove around Atlantic City a little, then headed back toward the ferry with a stop at Phoenix Diner for lunch.  The ferry back to DE was smooth as silk.  Once back home we relaxed on the sofa with the dogs and watched a movie.

handsome male 4-some there! smooches to all!

and mortimer can shake my cosmo (or something else) anytime!