Wow, what a weekend!


We arrived at Spouse's mom's house in VA about 9:00 Fri night. Shortly thereafter 2 of Spouse's (deadbeat) brothers arrived and stirred up a bunch of family drama. There was plenty I wanted to say but decided to keep my mouth shut since none of the drama directly involved me or Spouse. Sat morning Spouse & I took his mom with us to our favorite store Home Goods, and then we had lunch. Spouse's sister and daughter came over for a brief visit, and then Spouse & I got ready for my cousin's daughter Sarah's wedding.

It was close to 90 degrees and the wedding was outdoor (in my cousin's beautiful back yard) so we were thankful that the ceremony was very short. The reception was in a community center that used to be an old schoolhouse. It was simple but elegant and beautiful. Spouse & I really had a wonderful time, and enjoyed meeting some new people like Eric & Suzanna: 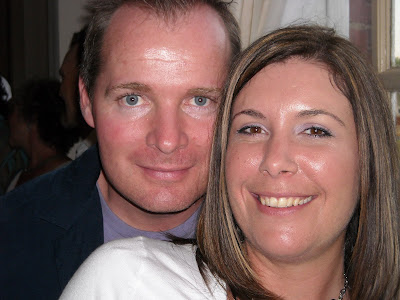 who are friends of my cousin Inez, the mother of the bride, and Steve her husband. What a surprise to find that Eric was raised in a small town in DE! Here is me and my cousin Inez: 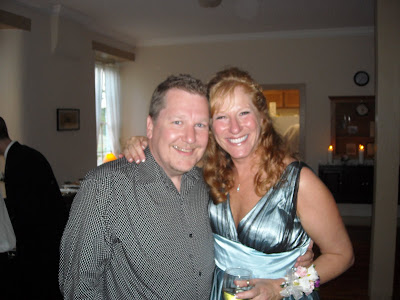 Spouse thinks she and I look a lot alike but I don't see it. It was especially nice for me to be able to reconnect with several of my family I haven't seen in many years. Here's me and my cousin April, Inez's sister: 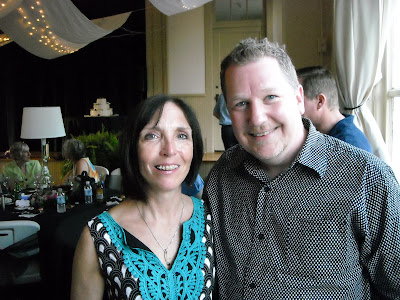 and me with April's daughters Micah and Chelsea: 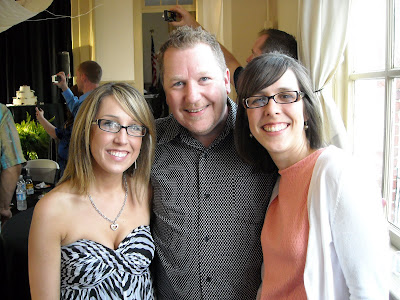 The last time I saw these young women was 14 years ago when Micah (left) was 9 and Chelsea (right) was 11. And below are my cousin Inez (mother of bride), my aunt Rosie (grandmother of the bride), me & Spouse. 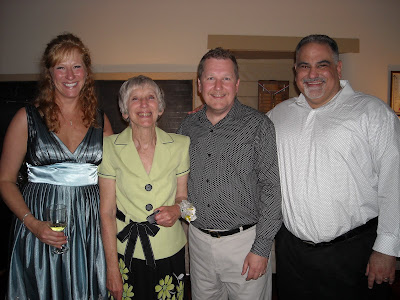 Scattered around the reception room were many framed photos of the bride and groom, which I thought was a nice touch. Also, on the wall near the entrance/exit there were bulletin boards with several copies of a dozen or so photos of the couple, with a sign indicating guests were to take home which ever photos they wanted. And speaking of photos, in the foyer there was a treasure chest full of funky hats, leis, sun glasses and props. A photographer encouraged everyone to put on something crazy and pose for a wacky photo. Spouse put on a shiny red patent leather floppy brim hat and I put on a bright pink fur hat, we posed with our backs to each, giving the photographer our best 'pimp' look! The photographer will place all the photos into a special album for the couple. I loved this idea!!


Here are Sarah and Bryan being toasted, just before cutting the wedding cake: 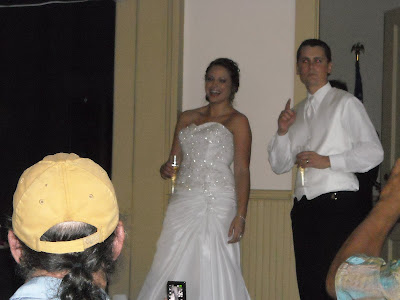 Since the wedding colors were black and white, I wore off-white pants with a black shirt with white polka dots and Spouse wore the opposite: black pants and a white shirt with black polka dots. It sounds super-gay, I know, but I think we looked really nice. 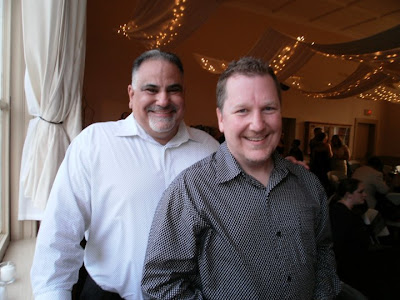 Click to enlarge this photo to get a better look at our polka dots.

Sarah's new husband Bryan got 'welcomed' into the family with a hilarious skit performed by Sarah's parents and siblings to the song "Welcome to the Family". 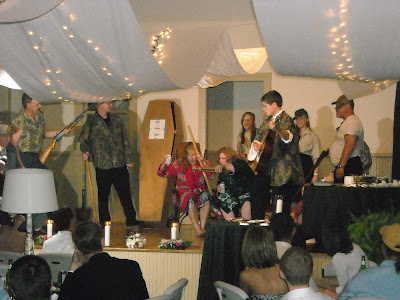 The lyrics are almost as funny as the skit!

Sun after breakfast we took Spouse's mom to Target and then relaxed for a while. At 3:00 we met up with Spouse's sister and her family, Spouse's brother (not a deadbeat) and his wife, and 1 of Spouse's deadbeat brothers at Taco House for an early Mother's Day dinner. (We will not be with his mom on Mother's Day.) Our food was wonderful as always, but it was very warm and humid on Sun and the a/c at Taco House was broken! They had the door open to allow a breeze to come in and set up a fan while someone worked on the a/c unit. We had a nice time despite the heat. We all returned to Spouse's mother's house and visited for a while, then Spouse & I left at 6:00, arriving home at 8:30. 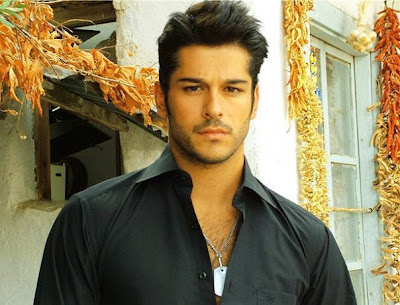 Thanks for sharing your weekend. You both looked very dapper.
Don't know how you could keep track of everyone......

I love weddings.....it must be about time for a niece or nephew to get married!

thanks for sharing...and yes, you and the hubby look really nice...you compliment each other well.

What a cute couple. Oh and the bride and groom was nice too. weddings are such a happy time in most cases. Thanks for sharing.