I had another crazy, hectic work week. Yesterday I thought I was going to have a nervous breakdown! I suddenly realized I had to go to the bathroom really badly but had been 'holding it' because I was so busy. So I left my office and walked down the hallway toward the bathroom but forgot what I was walking down the hallway for! That's what you call pre-occupied.

My friend Bob sent me this. 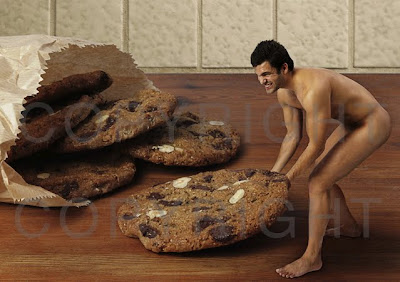 My 1st thought was: Nevermind the naked guy; wouldn't it be AWESOME if cookies really WERE that big???

Well, it looks like this rental investment condo purchase just might work out. We received an updated sales contract and several addendum (due to the fact that it was a foreclosure), signed them, faxed them back and mailed another earnest money check. Of course it won't be a done deal until we go to settlement, so I'm trying not to get too excited. But picking out the flooring, counter tops, and paint colors is fun!
Since our 1st summer in this house we've wanted to expand our screened porch. It is just 6' wide by 17' long. Its kind of like a screened hallway. Plus, there are 2 sets of french doors and the exterior screen door that open into the porch, so about 6 feet of the 17 foot length is unusable. For months we've been trying to get the contractor who did such a great job on our garage/bath/closet addition to give us an estimate for expanding the porch. He finally did and we decided we'd go for it. Then the condo deal came along and we questioned spending the money to do both at the same time. But yesterday the builder called me at 3:00 and said he had the permit and the concrete guy lined up; they'd dig and pour the footers the next day. Yikes! Sure enough, we have the beginnings of a larger, much more functional porch. The finished porch will be 14' by 17'.

The Tony Awards come on this Sun night. Spouse & I have not been keeping up with the theatre so we normally wouldn't watch the Tonys or be concerned with them at all. But our (gay) neighbors invited us to a Tony Awards potluck so we're going. I think awards shows are SOOO much more fun when watched in a group setting.
Hope everyone has a terrific weekend! 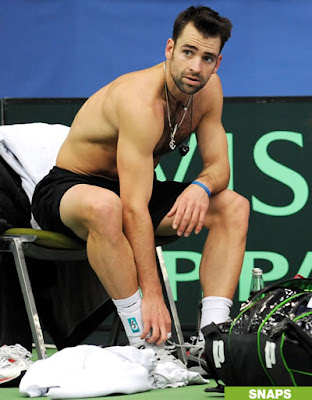 for your de jour collection

dammit, I can't see if the crush has chest fur! sit up straight (or gay) like your mama told you!

have a great weekend, mark!

"I think awards shows are SOOO much more fun when watched in a group setting."

Nice size porch! Could have a dance in there!

I hope your coming weeks settle down at the office and good luck on your rental investment!Surprisingly, Jon Michael Hill from this area has been nominated for "Best Performance by a Featured Actor in a Play," so there may be many eyes on the Tony's here.

I have been in lust with Nicolas Kiefer for years! Thanks!

Damn, you guys EVER gonna be done with that house??

Have a good weekend.

I want your disposable income lol! I hear there are a lot of good deals in real estate right now. I would love to play Donald Trump as well, but the market isn't the same here.