When Spouse returned from his personal trainer appointment Sat morning he suggested we do a little shopping. I readily agreed because I needed some new jeans.

Since he was in the mood to go into multiple stores, I took advantage by suggesting we return a few things 'while we're out'. (He hates exchanging/returning things so I usually do it alone.) We stopped at 2 stores where we returned a humidifier because it was too noisy to run while sleeping and a pair of jeans Spouse bought 2 weeks ago that had a flaw in the fabric. Then we stumbled upon a terrific clearance sale where Spouse got a pair of jeans and 3 long-sleeve pull-overs and I got 3 pairs of jeans and 1 long-sleeve pull-over for $83. Can you believe it? I was particularly thrilled because I usually have a difficult time finding jeans that fit me correctly, but I found 3 pairs. After hitting that 'motherload' we stopped at the grocery store to continue the day's shopping theme.
For dinner I made sausage and cheese omelettes and heated up the left-over brussel sprouts. Then we watch Thursday's "Project Runway" on the DVR. I thought this week's garments were very creative and attractive, despite the designtestants having to work with potato sacks. They were much better than last week's garments, for which the designtestants could use anything fabric wanted. Afterward we watched a Netflix DVD "The Journey of Jared Price". Since it was written by Dustin Lance Black ("Milk", "Big Love", etc.) I had higher expectations. But then I realized the film was made 10 years before "Milk" when young Black was still practicing his craft.
Sun morning Spouse & I headed to VA. We visited with his family for a few hours at his mom's house, then picked up my aunt Mary and went to dinner at our favorite Chinese 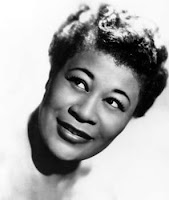 restaurant (in our old neighborhood) for an early dinner. After dinner we went to the Kennedy Center Concert Hall to see "Ella!", a tribute to my absolute all-time favorite vocalist (and musical genius, in my opinion) Ella Fitzgerald. Dee Dee Bridgewater and Janis Siegel (of the Manhattan Transfer) were outstanding, and Al Jarreau was pretty good too. The Dizzy Gillespie All Star Band was also wonderful, but unfortunately, too loud most of the time. The singers were often drowned out by the band's crescendos which prevented us from being able to hear the lyrics. I also think the Concert Hall could use a new sound system because even when the band wasn't playing we had difficulty understanding the dialog between the singers. But overall the concert was great! Aunt Mary picked great box seats and we had a wonderful evening.
We dropped Mary off at 9:45 and then drove back home, arriving at 12:15. The pet sitter had fed and walked Jordan for us so we were in bed shortly after returning home.
Crush du Jour: Matt Bomer 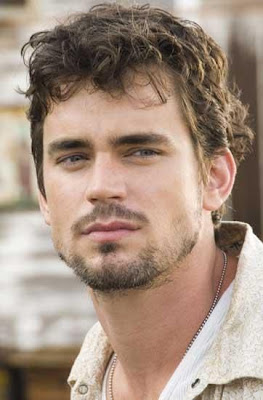 how is pouncer doing, BTW?

and I will pass on today's crush...not my type.

Sounds like an interesting weekend. I've been reading like crazy. I polished off about 1,000 pages in 3 days.


And CotD is hot in a scruffy way. I bet he cleans up real nice too.

I don't know who Matt Bomer is but he is cute!

Mark, glad you had such a nice time at the Ella tribute at Kennedy Center Concert Hall. I bet the experience was divine.