For a couple of weeks now I've been teasing you with brief mentions of a series shows in which I'll be performing this summer. Now I'm finally at liberty to say more.

I was approached during karaoke 1 night about being in a series of shows this summer called "Legends" where I would sing and impersonate 2 musical legends. I was told the shows would have professional costumes, choreography, wigs if needed, and be produced like a tribute show you might see at a theatre, only these would take place in the performance space within a bar. It sounded like fun, and judging from all the positive changes the owners had made to the bar since they took over a few years ago, I thought I could trust them to do a good job with this. I certainly didn't want to be a part of something that would turn out to be tacky or embarrassing.

In late April I attended a meeting where I met the other 5 "Legends" cast members and received my info packet. It contained photos, bios, and song lyrics for my celebrity impersonations, and then we discussed the flow of the shows.

The shows are to be 30 minutes long, with 3 legend impersonations each lasting 8-9 minutes, singing a medley of 4 well-known hits, followed by a group finale number. There are 6 cast members but only 3 perform in a show so we don't have to perform every week. Each performer impersonates 2 different legends, so there will be 12 different characters in total throughout the series of shows, taking place every Sat night between Memorial Day weekend and Labor Day weekend.

The bar owners thought the free shows would be entertaining, different than anything else available, and would draw even more people to the bar who will likely stay after the conclusion of the shows to dance, socialize, and drink. I think its a genius idea!

So, who will I be impersonating and what will I be singing? 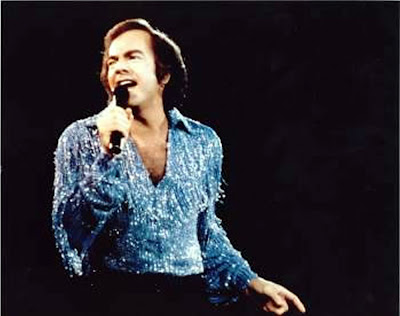 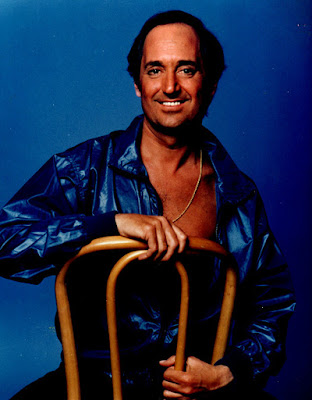 Obviously I don't look a thing like either of these guys, but the idea is to impersonate their vocal style, inflections, and movements/body language. Costumes and wigs will help too.

Impersonating Neil Sedaka will be easier of the 2 because people have told me my singing voice reminds them of Neil Sedaka, which is likely 1 of the reasons this legend was chosen. We have the same vocal range and tone. In addition to having a successful singing career in the 60s and 70s, Sedaka also wrote songs that loads of other artists recorded.

I was a bit skeptical of my ability to impersonate Neil Diamond. His range is a good bit lower than mine and I was afraid I wouldn't be able to reach the lower notes. But through the miracle of modern technology, they will be able to adjust the key of the songs so I can reach the lower notes.
This evening we had our first costume fitting and the cast in the 1st show (May 28) did a rehearsal on stage with mics. I'm really excited about performing in these shows! I enjoy singing and think its important for everyone to have an outlet for creative expression. Oh, and did I mentioned I get PAID?!?!
Posted by Mark in DE at Thursday, May 19, 2011

ummmmmmmmm, 2 hairy guys! although I prefer sedaka over diamond quite frankly (better songs from sedaka).

Congratulations on your groovy new gig, Mark! My partner and I love Neil Diamond and his music. Have a great summer singing the songs of both Neils!

that top is more gay that a busload of cher fans

You'll be great as either legend!