Welcome to Friday fragments, my weekly recap of topics too big to forget, yet too small to be their own post. Let's get started!

Spouse & I have begun watching the series "United States of Tara" on DVD from Netflix. It stars Toni Collette as a woman with multiple personalities and John Corbett as her husband. Its a really interesting series!

Construction continues on the new home being built in the empty lot across the street. It appears that my letter to the builder (along with the copy sent to the City) resulted in some improved behavior. The workers are no longer parking their vehicles on our street (where no parking is allowed) and the delivery vehicles have greatly reduced their blocking of our driveway and the street. However, they have continued to use our little 1-way street for deliveries rather than the 'regular' street.

I got a call early this week with some very sad news: a friend of mine passed away. He was the same age as me, but from the pieced together details I got, it sounds like he died from diabetes complications. Folks, 47 is too young to die so PLEASE have an annual physical and take any medications regularly which are prescribed to you.

I gave up on the ghetto gym. I disliked it so much there that I decided I'd rather not work out than to have to go to the ghetto gym. Spouse renewed for another month though. Oddly the ghetto gym bothers him a lot less than me. I checked on the status of the brand new gym and found they are planning to open in mid-March. I hope to get a membership there.

Today I did a little experimental baking and made gingerbread chocolate brownies. It was very simple and the brownies were ah-MAY-zing! I started with a Trader Joe's gingerbread mix and mixed up the batter according to the instructions, but then added a teaspoon of vanilla extract and a handful of milk chocolate chips. After pouring the mixture into a greased 8x8 baking dish, I sprinkled another handful of chocolate chips on top and baked. I ate 2 of the 9 brownies, saved 1 for Spouse, and gave the other 6 away to neighbors so as not to tempt us into over-indulging. The combination of ginger, molasses and chocolate was to die for.

Today I had lunch with my new friend Lou. We met last Sept at the car club dinner and awards banquet, and then I ran into him again in Dec at a local bar. We met for lunch and had a great time getting to know each other more. He works from home 3 days per week so he enjoys an opportunity to get out of the house like I did when I worked from home. I brought him a gingerbread chocolate brownie to eat at home later.


Today the weather was just amazing: sunny and 73 degrees, and its the middle of February! I really wanted to be outside to enjoy the gorgeous weather but I knew I had some reading to do for real estate school. So, I grabbed by bookbag and a beach chair and sat on the beach and read. 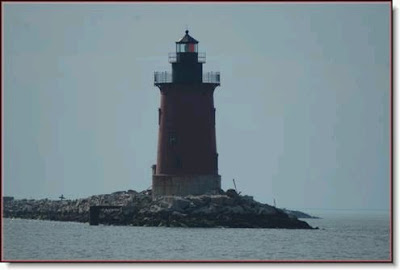 It was really great to feel the warmth of the sun, the breeze, and hear the waves crashing while I studied. Seeing the lighthouse in the distance was really cool, too. (The photo above was taken using a zoom lens.) Later when Spouse got home, we went for a drive in the Mercedes with the top down, and went for a walk on the beach. Sometimes I miss the access to great restaurants and culture we had when we lived in the DC area, and when I do, I remind myself that by living here I have access to the beach whenever I want it.

This weekend the Rehoboth Beach Film Society (RBFS) is screening 2 gay-themed independent films I've not seen yet. "Violet Tendencies" was written by my friend Jesse Archer and stars Mindy Cohn who played Natalie in the TV series 'Facts of Life', and "You Should Meet My Son" will be shown Sat night and Sun afternoon respectively. (Click on the titles to watch trailers.) I'm excited about seeing both films and will report on them on Mon.

Here's wishing everyone a great weekend!

I would boink john corbett in a new york minute! WOOFY!